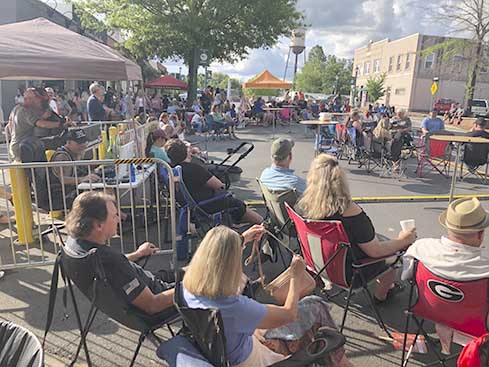 A large, enthusiastic crowd filled much of Main Street during the inaugural Second Saturday event, which was held Saturday, May 14.

The first Second Saturday event on Main Street in Jasper was a resounding hit, with organizers and vendors saying it exceeded their expectations.

“It was very, very successful,” said Marty Callahan of the Downtown Development Authority, the entity coordinating the event series. “The weather was perfect and everyone I’ve spoken with has good things to say about it. The vendors and businesses have said they did really well, and people who came out said they had a great time.”

Callahan estimated attendance at any given moment was between 700 and 800 people, but noted that it was difficult to know for certain as the event was free and non-ticketed. The stage, where headliner T. James Band and opening act Rusted Melody performed, was set up in front of the Pickens County Courthouse. There was a thick crowd lining the sidewalk in front of Pendley Creek Brewery and L.C. Tacos and Margaritas and spilling into the road. All outdoor seating was at capacity and most people brought their own fold-out chairs. Vendors were set up in that area and also down Stegall Drive, where games of cornhole and giant Connect Four were available.

This was the first of four Second Saturday events that will be held every month through August of this year. The DDA organizes the event, which is primarily funded by the city of Jasper.

Callahan said organizers made an effort to keep the event local, with local musicians and local vendors.

“We want to support what we have here in Pickens and keep that money in house,” he said, noting that local businesses not in the heart of downtown were allowed to partner with Main Street businesses. “We wanted to keep lines at businesses from getting too long and this helped.”

Looking ahead to the remaining three events, Callahan said they are considering  more vendors “and probably some cooling stations as it gets hotter this summer.”

He also said he has already been contacted by several businesses who have heard about the successful Second Saturday and who want to be involved either through sponsorship or by being a vendor.

Callahan noted that parking went smoother than Main Street events in the past as only a small section of Main Street was closed to motorists, and not the entire street in the central business area. This was also beneficial to downtown businesses along Main Street.

“We definitely want to thank all of the sponsors and vendors,” he said. “We didn’t know what to expect, but it went so well. We had a lot of local people come out, but also had people from Canton, Calhoun, Dalton and other areas. We think this will be a great thing for our city in the future.”

• July 9 with headliner Eastbound and Down.