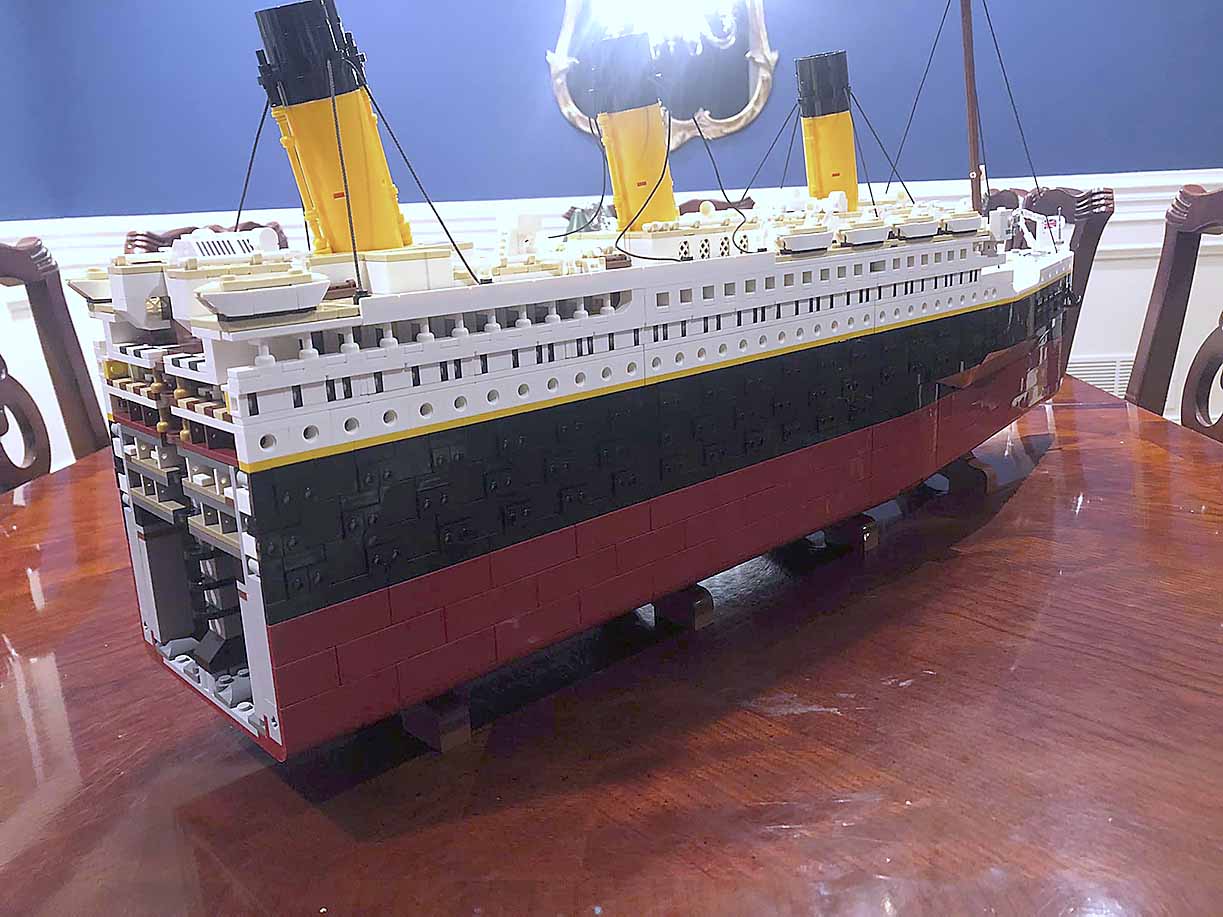 A view of the Titanic in progress, with a part of the detailed interior visible.

How many pieces does it take to put the Titanic back together again?

Well, if we’re talking about Lego it takes 9,090 pieces, the second largest set Lego has ever made.

Pickens native and organizational wizard Teri Lawson has been putting sets like this one together for four years now, saying it’s therapeutic and makes good use of her highly organized personality.

“I have kids, and so when my son Will was probably 8 or 9 they came out with Harry Potter Lego and for Christmas one year he got the entire village and a Lego table and I put them all together for when Santa came.” Lawson said. “I enjoyed it then, but several years went by and when Lego came out with Hogwarts Castle about 4 years ago that was the first one I bought for myself.”

The castle is a highly-detailed 6,020 piece set she put together as her own project after her kids were grown. “Now whenever they come out with any Harry Potter Lego I get them. This went on sale around midnight November 1st and I stayed up to make sure I ordered it,” she laughed.

Lawson likes to do the really big sets. In Lego speak, big means the number of pieces. A lot of sets that you see at places like Target and Walmart will be anywhere from 300 to 2000 pieces. These larger sets range from 6 to 9 thousand.

“I’ve been doing this about 4 years. I did Hogwarts first, then they came out with a 6,500 piece Taj Mahal, then last year was the Roman Colosseum and it was a little over 9000 pieces, and this was this year’s and it’s about 9100 pieces,” Lawson said, pointing to her Titanic. “I just take my time, but I was excited about this one so it took me three weeks,” she told me with a smile.

It took her thirty to forty hours to finish the Titanic set, but she can do a thousand piece set in an hour or two.

She praised Lego for giving good instructions and packaging everything well. The Titanic box holds smaller boxes and plastic pouches labeled in order, so people know they’re going to do 1, 2, 3, 4, etc. in that order.

To compare, Lawson showed me a faux Lego set, where the blocks were smaller and harder to manipulate and were not organized. Just 2,500 pieces all in one bag and she had to sort every one.

“I don’t know what it’s even called, but my daughter gave me Sanford Stadium in that, and it’s just the smallest pieces you’ve ever seen. Just these tiny little pieces with horrible directions and I just thought ‘this will not defeat me’ as I worked on it.”

Her Titanic Lego set had two strings that were slightly off-length and a white piece that was the wrong size (she had a replacement ready from another set). As a business student I can guarantee you a mistake every 9,000 pieces or so is amazing quality control and any company would wish for anything close. It also makes building the sets much more enjoyable for people like Lawson.

When she runs out of room to display her sets Lawson carefully dismantles each set, puts the pieces in Ziplock bags, and places them back in the box.

Her next project is a Lego globe, about half-done at the time I spoke to her, but knowing her pace it might be finished by the time the Progress goes to print.