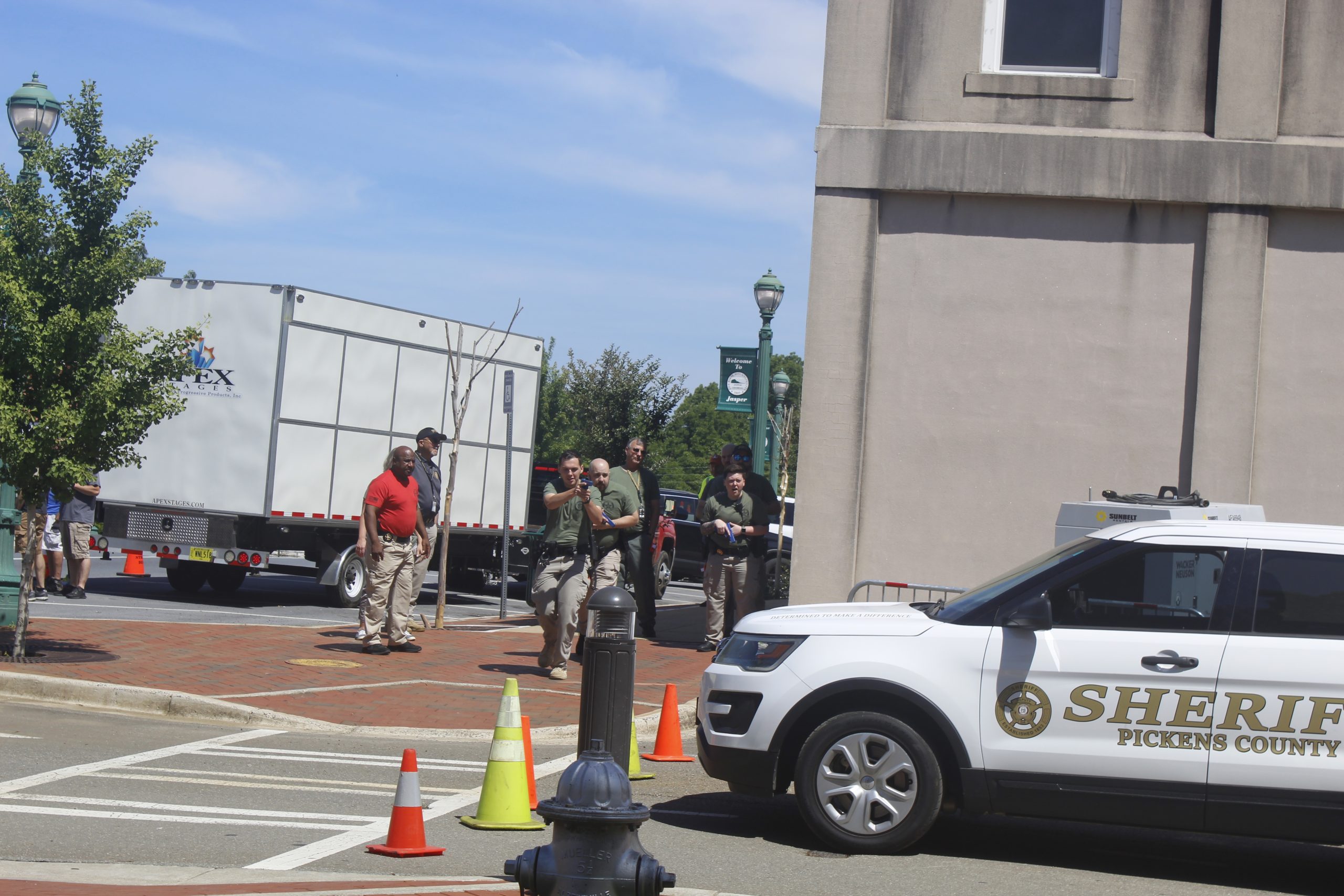 photo/ Dan Pool With the blue guns out for training, deputies, under the watchful eye of command staff of the sheriff’s office, perform an active shooter response drill on Jasper’s Main Street Saturday.

On Saturday, 26 officers with the Pickens Sheriff’s office conducted group training exercises for active shooter situations, including simulated drills at the courthouse downtown and school campuses.

Chief Deputy Jeff Hall, supervising the groups of deputies gaining access to the front of the courthouse with a pretend shooter inside, was emphatic that the day’s work was not in response to any of the shooting around the nation, nor anything special.

Hall said it is disappointing that Georgia and many other states do not require all law enforcement agencies to conduct this type of training.

“For any agency who said law enforcement needs more training after the Texas shooting, I say “where’ve y’all been?” Hall said. “We do this regularly.”

In Pickens law enforcement gets two days planned for just their officers, then there are additional days coordinated with medical first responders and in the schools with teachers at the classroom level on what they should do in the event of a school shooting. The sheriff’s office hopes to conduct a large multi-agency training event with surrounding jurisdictions later this year or next year.

Asked about the Uvalde shooting, which left 19 students and two staff dead, Hall said, “We don’t have all the details but obviously something broke down [in the law enforcement response],” he said. “That’s why we train on this, God forbid it happen here, we don’t want anything to break down.”

When asked about reports saying officers were reluctant to enter the school where the 18-year with an assault rifle was still at large, Hall said he didn’t believe it was fear on the part of officers, rather some kind of communications failure among the responding units.

He said even if there had been a lack of details on whether the shooter was barricaded in one room or still roaming the halls, training dictates that officers need to get in there so that medical attention can be given to anyone wounded. Hall said they train here with a high priority given to medical first responders be able to approach victims quickly to reduce potential casualties from people “bleeding out.”

During the training day at the courthouse, Hall and other supervisors were shouting commands at the deputies as they covered one another coming around the corner of the building and going in the front door. Among the commands were “somebody move,” “don’t just stand there,” and once “don’t shoot your partner in the back.”

The deputies had “blue guns” for training, however, not real fire arms.

“At end of the day, no one can really be prepared for the devastation that can take place, but if we train together, pushing forward together we will be better prepared if, God forbid, something does happen,” Hall said.