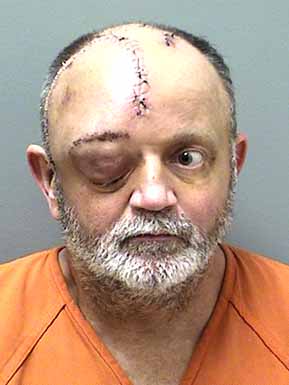 By Submitted Article on February 2, 2022

Press Release: The Office of the District Attorney for the Blue Ridge Judicial Circuit

District Attorney Shannon Wallace announces that at a January 26, 2022 plea hearing, Ronald Richard Goss, 57, admitted that he attempted to kill his estranged wife in a premeditated attack in her Ball Ground home. Goss pled guilty to attempted murder, home invasion, attempted arson, nine counts of family violence aggravated battery, and possession of a firearm during the commission of a felony.

On February 11, 2018, the defendant arrived unannounced at the home of his now ex-wife, Tina Davis, to ask if their marriage could be saved. After Davis told Goss she wanted to proceed with the divorce, Goss returned to her home at approximately 4 a.m. on February 12, 2018 with the intentions of killing Davis. Goss, who had been married to Davis for almost 10 years, knew her daily routine and waited outside her window until he saw lights turn on at 5 a.m. He then cut off the power to her house, entered her garage, and forced entry into her home by firing shots at the door. At 5:04 a.m., the home’s security system sent an emergency alert to dispatch indicating a break-in.

Davis was in the master bathroom when Goss broke into the home and could hear Goss talking to her as he approached. Once inside the bathroom, Goss told Davis that if he could not have her, no one could and immediately started firing shots at her using a 40-caliber Smith & Wesson handgun. Seven shots struck Davis in her chest, left forearm, left thumb, left shoulder, right hip, and head, causing internal injuries as well as a spinal injury that left her with no feeling from the waist down. Even though Davis was severely injured, she never lost consciousness. At some point during Goss’s shooting spree, a bullet ricocheted and struck Goss in the face.

After using his cell phone to take photos of the victim and himself, documenting the scene and injuries, Goss called 911. He calmly told the dispatcher that he had shot his wife and himself, then asked for assistance. Cherokee County Fire & Emergency Services responded to the 911 call and transported both Goss and Davis to the hospital. The investigation by the Cherokee Sheriff’s Office also yielded evidence that prior to repeatedly shooting Davis, the defendant had doused the victim’s car with gasoline with intentions to commit arson. The car was parked inside of the attached garage.

Davis survived the attack but sustained serious injuries, including an incomplete spinal cord injury. Over the past four years, Davis has undergone more than 15 grueling surgeries and dental procedures to help correct the damage Goss caused during this shooting. She received care at the Shepherd Center, including six weeks of inpatient rehabilitation and four weeks of the day program. She has completed more than 459 hours of physical and occupational therapy. Today, Davis is able to walk on her own with the assistance of crutches. An avid runner prior to this crime, Tina has set a goal to run again someday.

During the sentencing hearing, Davis walked to the stand to provide her victim impact statement. She shared photos of her life before the events of February 12, 2018, describing her love of physical fitness and running. She also shared photos and videos of her long recovery and talked about the humiliation of no longer being the independent person she once was.

“But what hurts most are the things he took from my future. I would have been a go-to babysitter for my grandkids. I would have been the fun Nana. These should be the best years of my life. I should be checking off my bucket list. But thanks to him, I spend my days in therapy just to regain a portion of what he took. I may not have died that day, but he took my life just as if I had. A weaker person physically, mentally, spiritually would not have survived,” said Davis, imploring the court to not let Goss benefit from her strength in living. “There will be no parole for me. Please make him live with the consequences of his decisions for the rest of his life.”

The State recommended a sentence of life plus 35 years to serve in the state penal institution. The defense recommended a sentence of 20 years to serve in confinement with life on probation. After hearing impact statements from Davis; Mason Mullins, the victim’s son; and Doris Davis, the victim’s mother, Superior Court Judge David Cannon, Jr. sentenced Goss to 65 years to be served in the state penal system.

“This defendant’s actions on February 12, 2018, were the result of a planned vicious attack in which he did everything in his power to kill Tina Davis. It is only by the grace of God that she is still here with us,” said District Attorney Wallace, who prosecuted this case on behalf of the State. “While his plan to kill Tina was unsuccessful, in less than five minutes, Mr. Goss ended Tina’s life as she once had known it. In the four years since Tina was ambushed in her home, she has endured a tremendous amount of physical and mental suffering, and I am in complete awe of Tina’s strength and determination to regain what this defendant took from her. Hopefully, the resolution in this case will provide her and her family comfort and closure.”

The Office of the District Attorney for the Blue Ridge Judicial Circuit is committed to seeking justice, acting with integrity, and collaborating with partner agencies in the criminal justice system in order to protect the citizens of Cherokee County and the State of Georgia.