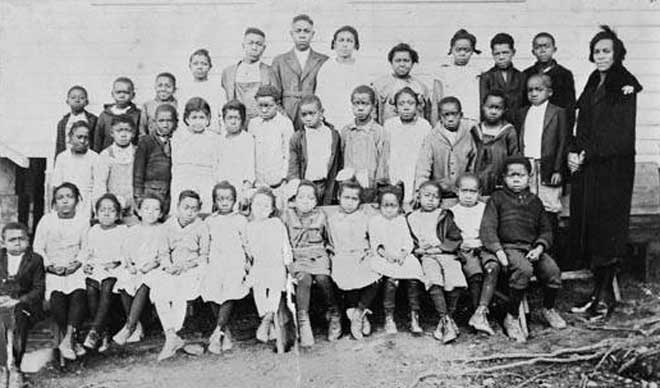 As was the case with many early schools, churches served a dual role, church on Sunday and school classes on weekdays. In the 1880s Friendship Baptist Church was organized and met in a two-story frame building which served both as a church and school. The Negro school in Nelson was housed in the same building that was used by Pilgrim Baptist Church.

In Tate, Colonel Sam and the Georgia Marble Company were responsible for all of the schools, Black and White.  The company provided the building, and had a boarding house where teachers resided. Sam was very concerned about the education of children in Tate. He was also very particular about his teachers and personally hired them.  Of course there were separate White and Negro boarding houses for single teachers.

In 1957 colored schools in Nelson and Jasper were consolidated with the Training School.  At that point the name changed to Tri-Cities High School or Tri-City Elementary. Consolidation meant that children from Nelson and Jasper were bused to school and that all of the Negro children attended the same school.  Tri-City operated for another ten years and was closed due to school integration in 1967.

The first principal was Mr. McCloud, followed by Mr. Archibald. The last principal was B.C. Brown. Professor Brown was murdered at an Atlanta restaurant while serving as principal. Due to the tragedy his wife, then a teacher and assistant principal at the school, took over as principal. Lena Brown became a legendary leader, at Tri City, and later for her leadership during integration. There were a number of teachers, including Mrs. Brown, Willie Mae Weaver and Mary Lois Roach Moore, who taught at Pickens County Training School, Tri-City, and Pickens High School or Tate Elementary.

“We conclude that in the field of public education the doctrine of ‘separate but equal’ has no place. Separate educational facilities are inherently unequal.”  Written by Chief Justice Earl Warren who wrote the Opinion for Brown v. Board of Education.

The Supreme Court settled the question in 1954. But that begs a second question, Did the Pickens County Board of Education provide equal facilities, books and equipment to Black and White students alike? Yes and no. Teachers at Tri-City were excellent and the facility acceptable. But there were inequalities in other areas.

Textbooks were an issue mentioned in many of my interviews. Several former students recalled that the same hand me down Biology textbooks were used for three years of high school. When the children of  Emma Julia Collins Washington were attending Tri-City she was working for a local doctor. Emma Julia often helped the  family’s children study. She was shocked when she compared the textbooks used at Tri-City with those provided in White Schools. Texts used by her children were less advanced, out of date and ragged. Her son Michael Collins explained that science equipment was also lacking. “There was no gym,” he remembered. “We had a winning girls basketball team, but they practiced and played games outdoors. There was no baseball or football, only boys and girls basketball. When we transfered to Pickens High School during integration the differences between what we had at Tri-City were like night and day.”  Michael concluded, “At Tri-County we got a good basic eduction from intelligent teachers.  But what we received, compared to the White schools was not equal.”

Pickens Compared to Other Schools in North Georgia

While Black schooling in Pickens County lacked total equality, it substantially  better than what was provided in neighboring counties. Gilmer and Fannin County provided no high school for their Negro children. In 1976 I interviewed a former Fannin School Superintendent, Travis Guthrie, who explained the school board’s reasoning. In Blue Ridge there was a 1-8th grade school, the Blue Ridge Colored School at Mt. Calvary Church. In fact local resident Willie Mae Weaver taught at the school for her first two years as an educator.

No accommodations were made for Negro high school students in Fannin County until the late 1940s when the teacher at the Colored School pleaded that she had a female student who was brilliant and should be encouraged to attain more education. Rather than build on to the school or hire another teacher, the Board of Education devised a plan. The young woman could be driven daily to the Pickens County Training School in Tate. Given the conditions of roads, such a ride could easily be over two hours each way. Alternatively she could live with relatives that had a Negro school and the Fannin Board of Education would pay for her room and board. She, and others after her, chose to board with family. Mr. Guthrie added that he always attended the student’s graduation at the out-of-town schools they attended.

Having written and edited five books of history centered in Fannin County I have concluded that such ill treatment of children contributed to the decline of the Black population in Blue Ridge.  The 1900 census of Blue Ridge recorded 182 Black residents, or 15% of the town.  Over the years the community shrank to only a few when I interviewed resident in 1975. Long time resident Edna Dickey remembered that many families moved rather than send their high school students to live with relatives.

A high school education was not available to students in Gilmer County. For many years the Roberts family children, who lived near Ellijay, were driven to the Tri-City School by their father. All of the children graduated from Tri-City High School before integration.

Negro education in Pickens had flaws, but every child was provided an opportunity for an education from elementary to high school. Many Black students from Pickens attended college and achieved in fields like education and business.  Michael Collins went on and graduated from Reinhardt College. He recently retired as a detective with the Cherokee County Sheriff’s Department. A pastor for many years, he is continuing his ministry. I asked him, besides his parents, who influenced him growing up. The list was long, too long for this article. He included members of Calvary Baptist Church as well as teachers and coaches, White and Black. Michael was smart enough to observe inequality as a teen, and smart enough to appreciate the many people in the community that made his success possible.