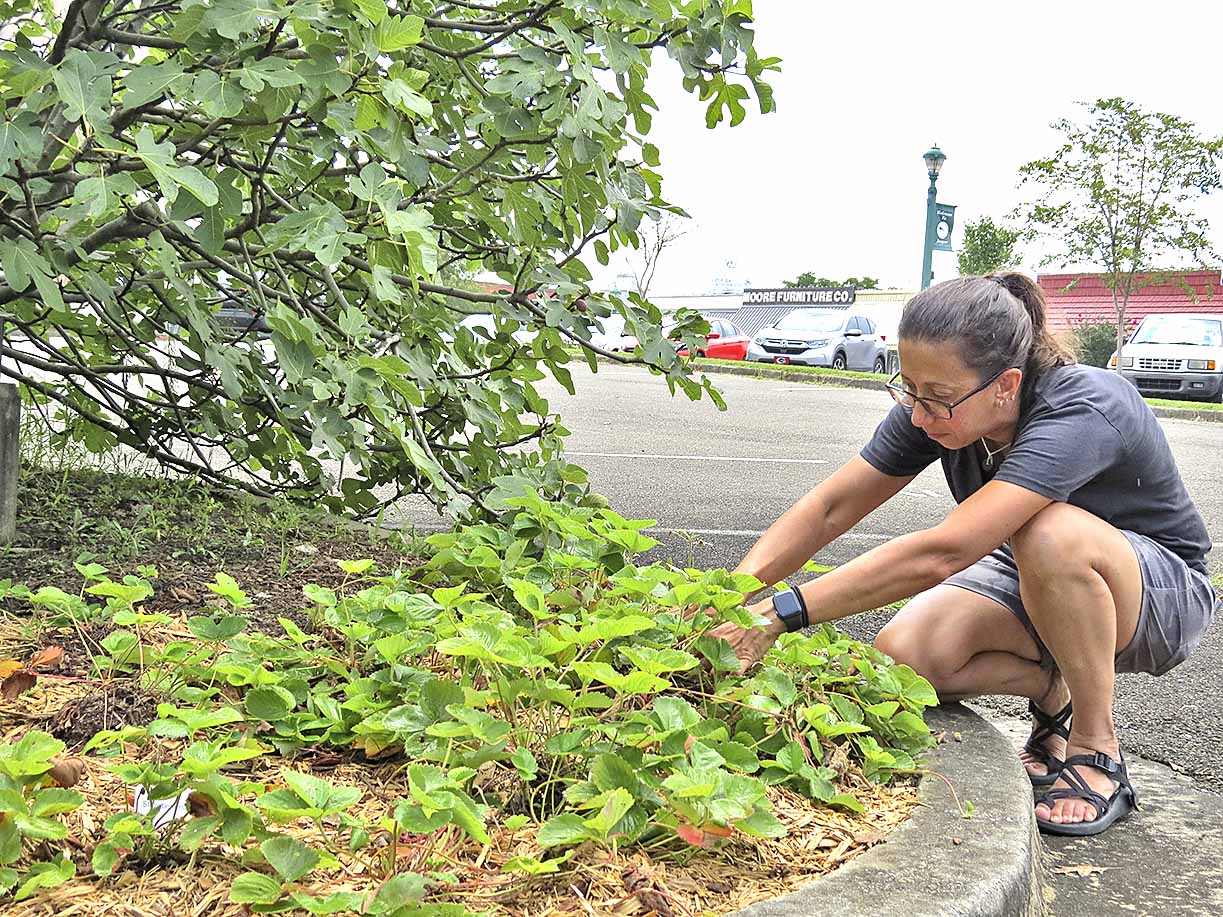 Can Jasper be an eco-tourism destination? Keep Pickens Beautiful thinks so

Vered Kleinberger trims up strawberry plants in a North Main parking lot. Edible Pickens want to expand with new crops and in new areas around town.

Outside my office window I have a clear view of a large fig tree in the parking lot, planted on one of those little grassy islands with a streetlight. During peak fig season I regularly see people stroll by or drive up and snag a few – and sometimes they can’t wait to get home and have a sample right on the spot.

The tree has been there for 10 years, planted as a project of the “Edible Jasper” non-profit founded by Vered Kleinberger, now president of Keep Pickens Beautiful. As part of her larger vision for KPB, Kleinberger is rebooting Edible Jasper, which aims at creating more sustainable and useful landscaping. She is also beefing up KPB’s Adopt-A-Road program and working closely with the recycling center, all to help brand Pickens as an eco-friendly, ecotourist destination.

“Sure we’ve got marble, but it’s not serving as a way to draw people off the interstate to come to town,” Kleinberger said. “We need a more marketable identity. My hope is to strengthen these projects, help us become a community known for sustainability, and also grow KPB’s volunteers and members. I want to collaborate with anyone and everyone that wants to work with us. KPB is in a unique position to be a hub for the community because our mission of beautification, reducing waste, and education is something that is relevant to everyone and every business in some way.”

The goal of Edible Jasper, now joined by KPB, is to “transition as many of the gardening spaces in town to things that are edible, low-maintenance, beneficial, or native,” Kleinberger said. “I think that if we can partner with local businesses and the other incredible resources we have in Jasper – our vineyards, farmers markets, breweries – Edible Jasper can help us develop a larger identity as a place that values sustainability and stewardship. These plants would also be a great resources for people in the community.”

Inside the tiny green KPB building at the corner of Main Street and Spring Street, Kleinberger pulled up a website called Incredible Edible (not to be confused with Edible Jasper), which includes a large database of public and sustainable gardens in England that began as a small community garden movement. As the Edible Jasper project grows here, Kleinberger wants to create a cartoon-style map that will show tourists and residents what’s planted where, and draw them to visit those locations – just like the parking lot fig tree does. These maps could be placed at local businesses or used as placemats at restaurants, which she would also like to survey to see what herbs they would  use in their kitchens.

And she’s already getting the ball rolling.

Just last week Kleinberger added herbs – oregano, lavender, and others – around the KPB building; She and KPB volunteer Jenna Farmer planted a patch of strawberries under the fig tree in the Pickens Progress parking lot; and there are immediate plans to revamp the area near the Pickens Chamber of Commerce with edible and native landscaping. She’s also had meetings with community leaders to pitch the idea on a larger scale, and hopes to work alongside local government to bolster the project.

“Edible landscaping is a practical solution that is not only useful, but can benefit the entire community,” she said.

Regulars to Pickens County’s new recycling center may have noticed colorful banners above each bin that make it easy to identify which items go where. The banner project – which will also be at the Cove Road location – is one of many ways KPB is working closely with the center and its leadership as part of the larger KPB vision/reboot.

Kleinberger designed the banner graphics herself and KPB paid to have them produced; and there are also plans to have colorful recycling guides printed and made distributed for people to keep at home as a reference.

“We have an incredible recycling center now,” Kleinberger said. “It’s really becoming the recycling hub of northwest Georgia in my mind. We’ve got people coming here now from out of county to recycle, including some governments, because it’s more affordable. The new director Kenny, who is also on the KPB board, is doing an amazing job, and this only helps make us a more sustainable community. They have been a huge part of what we are doing. ”

Volunteers with their Adopt-A-Road program who collect trash on roadsides will receive new laminated cards to take to the recycling center so they can dump that trash for free. Kleinberger (who recently redesigned the entire KPB website) even has plans to add a digital portal feature where AAR volunteers can report their garbage collection online.

“It’s been so inconvenient in the past having to call at very specific times, this should hopefully make it so people will log what they’ve collected,” she said.

KPB will also introduce incentives for recycling – collect x-number of bags and get a KPB pen, coffee cup, or other KPB swag at the end of the year.

In addition to all the other project initiatives up KPB’s sleeve, Kleinberger wants to attract more members, more active board members and more volunteers to the organization, which is funded in part by the county government.

“We’ve got some great members and volunteers, but we need so many more – we really need some active members and volunteers to help. I would love to see this organization grow, and to make it more appealing to the next generation to inspire them to get involved. What KPB does is really a benefit to the entire community – and we’d love their help.”