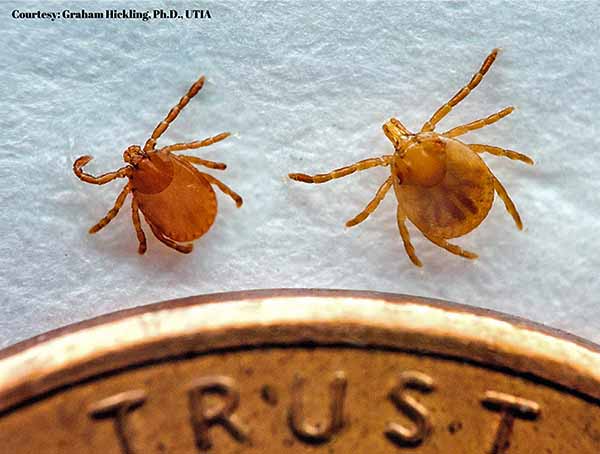 “If an animal has one tick, it’s probably our common Lonestar tick; if a cow shows up with hundreds of ticks on it, we’re going to be very suspicious (of Asian longhorned ticks),” expert says

As of Sept. 21, an invasive and dangerous pest, the Asian longhorned tick, has been confirmed in Pickens County. Experts are warning livestock producers and the public to be on the lookout, as the ticks can kill an animal by attaching to a host by the hundreds.

The Haemaphysalis longicornis tick was discovered on a cow on a cattle farm in Pickens County, marking the first Georgia case of the invasive tick, which has been found in 16 other U.S. states so far.

“Currently, I would not be at all surprised to find that the tick is already well-established (especially in wildlife) in other counties in Georgia, as well,” warned Nancy Hinkle, University of Georgia entomologist and UGA Cooperative Extension veterinary entomologist for the state.

“The most significant impact will likely be on cattle, one of the tick’s preferred hosts,” Hinkle said, stressing that because this tick can transmit a significant cattle disease, theileriosis, it potentially poses a serious threat to cattle economics through production losses and control costs.

Ticks are bloodsucking pests that are the most effective pathogen vectors of any blood-feeding arthropods. In their native range, Asian longhorned ticks are known to transmit a number of human disease-causing bacteria including Anaplasma, Babesia, Borrelia, Coxiella, Ehrlichia, Rickettsia and Theileria, Hinkle said.

“These ticks also transmit the virus that causes severe fever with thrombocytopenia syndrome in humans. Here in North America, researchers demonstrated that this tick could transmit Theileria orientalis Ikeda strain in cattle. There is also some indication they may produce tick bite-induced red meat allergy,” she added.

The good news for cattle producers is that tick control products recommended and registered for tick control use on cattle will be effective against Asian longhorned ticks as well, Hinkle said. A list of these products and how to properly use them can be found starting on page 68 of the 2021 commercial edition of the Georgia Pest Management Handbook.

The Asian longhorned tick was first discovered in North America on a sheep in New Jersey in 2017. In only four years, it has spread to 17 states.

Perhaps the primary reason it has spread so quickly is that this tick is parthenogenetic, which means it does not need a male to reproduce. In fact, males are rarely found in this species of tick.

“Any female, dropped anywhere, can reproduce. So, if an Asian longhorned tick is on a bird that is migrating south for the winter, and the tick drops off in south Georgia, she can lay a batch of eggs and start a whole new tick population all by herself,” Hinkle explained.

Every single one of those eggs will produce a female tick.

“No eggs are wasted. In most animal populations, half the eggs are males, which means they can’t contribute to the next generation. Females are the only ones that leave progeny. With these ticks, all 2,000 eggs from each batch are females which all produce eggs, and so on. That doubles the population potential every generation,” Hinkle continued.

The most important action to be taken now is to be proactive in caring for animals and ourselves, according to Hinkle.

The Asian longhorned tick has been confirmed in north Georgia, marking the first Georgia case of the invasive tick which has been found in 16 other U.S. states since 2017.

“If an animal has one tick, it’s probably our common Lonestar tick; if a cow shows up with hundreds of ticks on it, we’re going to be very suspicious (of Asian longhorned ticks),” Hinkle said.

Hinkle encourages anyone — cattlemen, horse people, people with backyard poultry, pet owners — who finds a lot of ticks on animals or any unusual tick infestation, to call the Georgia Department of Agriculture Animal Health Section at 404-656-3667.

Pet owners need to be aware of this new tick and should be conscientious about killing any ticks found on their pets or themselves.

“Even a partially fed tick, if pulled off the animal and thrown to the ground, can crawl off and lay over 1,000 eggs. We encourage you to put all ticks in a small bottle of alcohol to ensure they die,” Hinkle urged.

Fortunately, it appears that products registered for tick control on cats and dogs will also be effective against the tiny, invasive tick, which is known to carry a pathogenic punch, Hinkle said.

As always, everyone needs to continue to be vigilant in checking themselves and family members for ticks after spending time outdoors, Hinkle urged, whether working or playing in yards at home, hiking in the woods or working in farm pastures.

[Michele Hatcher is the editor of the Hexapod Herald, the newsletter of the University of Georgia Department of Entomology.]