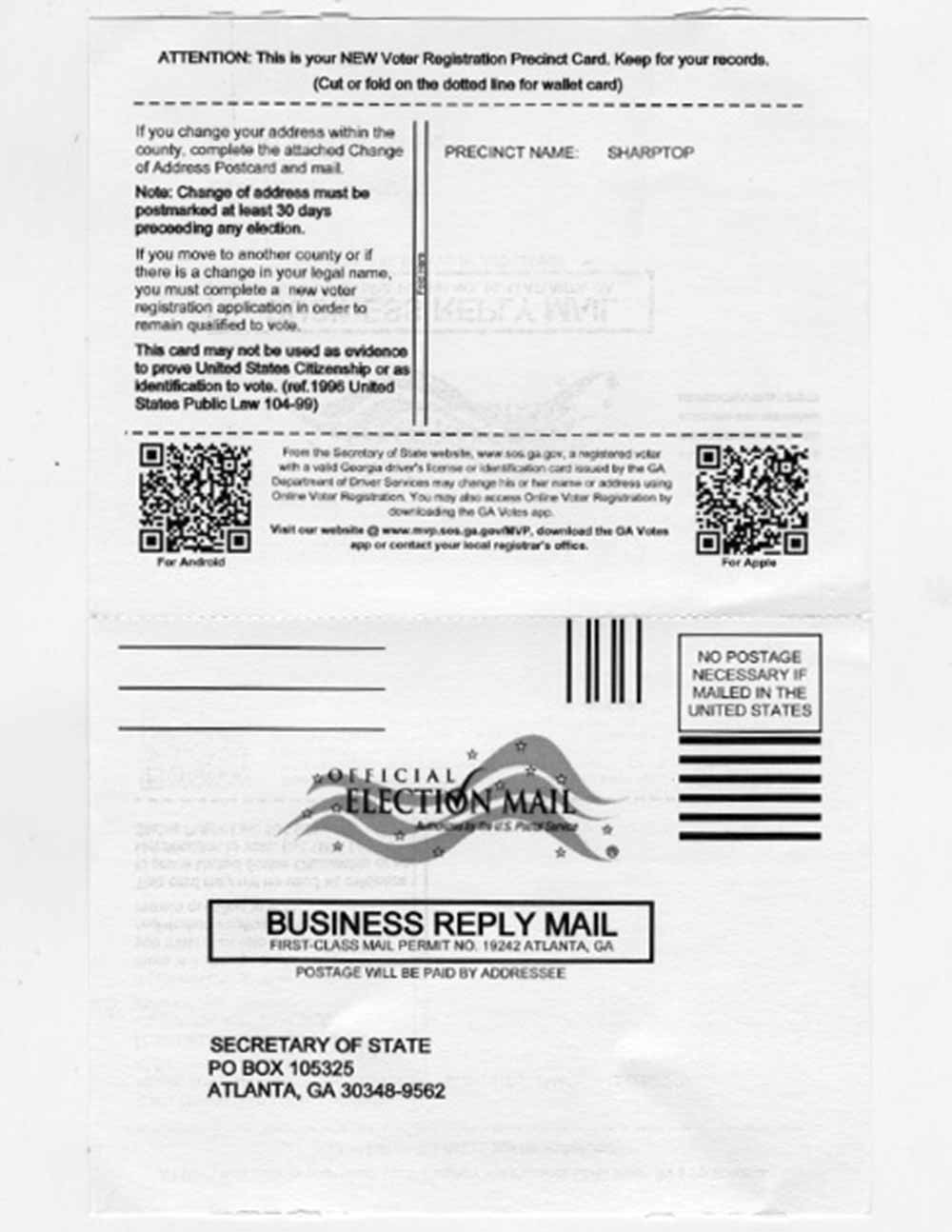 The outside of the postcard mailer before it is opened is on the left and the inside is on the right. The bottom is only useful if a voter has changed address. The top is important because it lists a voter’s precinct. The top and bottom can be torn apart and separated.

“Why am I getting a change of address card? My address has not changed,” is a question Stacey Godfrey at the Pickens County Elections office has gotten countless times in the past week.

If the volume of calls Godfrey has received is any indication, many other residents might have the same question after getting the recent round of election mailers.

The mailers look like postcards with a large change of address section on one side, but they can actually be opened up, something many people miss until it is told or shown to them.

“You can barely see these stickers at the top, but if you tear it open it is actually your precinct card,” Godfrey explained. “It lists what your precinct is, which is where you vote. Our local lines didn’t change, but our congressional lines changed. So it tells you now that you’re in congressional district 11, you’re still in 51 senate, you’re still in 11 house. It also tells you your commission district and for school board that we vote at large.”

Godfrey expressed some frustration with the state over how the process went. “Originally these cards were supposed to be printed on pink or yellow paper, to make them stand out, but, like everything else, they had an issue getting the volume of paper that they needed and  they ended up having to do white,” she sighed. “Well, white is already what people get when they register to vote, so it’s very confusing along with the fact that you can barely see the redistricting and even when you see it some people don’t know what that means.”

The office is also getting calls saying “my husband got his but I didn’t get mine.” They had to send them out to all registered voters in Pickens County, which is almost 26,000 voters. Therefore, Godfrey said, they’re still getting them out and only so many can go out per day, so they’re coming.

The elections office plans on having eight voting machines instead of four during this year’s advanced voting because the ballot is so long. They will do a time study for the secretary of state on how long it takes someone to get in line and through the process, but with an 18-inch ballot, they’re sure things will take longer than normal.

If anyone wants to see a copy of the sample ballot one can be found in this week’s Progress, at the elections office at 83 Pioneer Rd, or at mvp.sos.ga.gov. The sample ballots on that site are specific to the voter after they input their information.