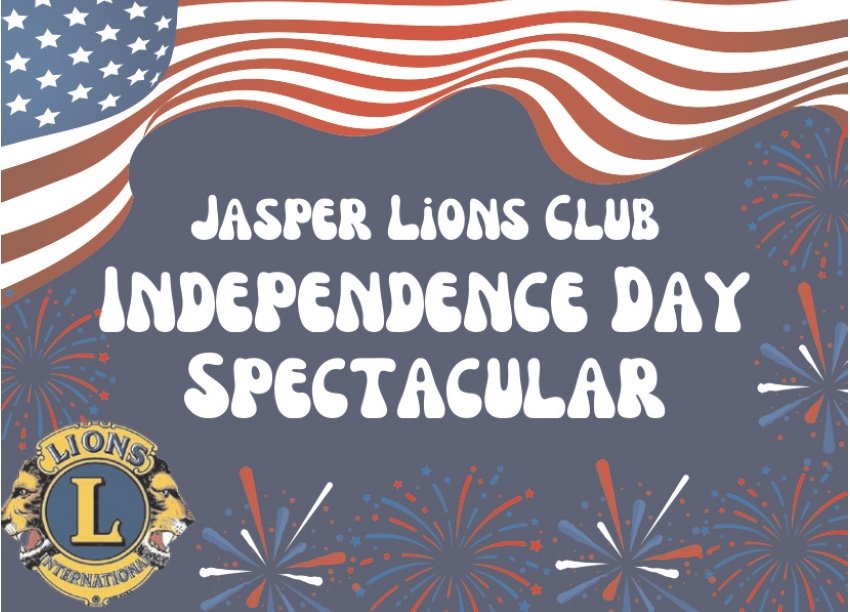 See an easy-to-read schedule of events and Fourth of July celebration sponsors
at the bottom of this article.

The Jasper Lions say plans for the Fourth of July celebration are going smoothly, with the full schedule of events and entertainment finalized.

The fair and rides at Lee Newton Park will begin Wednesday, June 29 and run through Monday, July 4.  The lion’s share of events and entertainment are on July 4, including the parade that will roll out at 1 p.m. to streamline with the fair’s opening time around 2:30 – 3 p.m.

Armbands for unlimited rides will be for sale at fairgrounds for $25 every day except for July 4, when individual ride tickets must be purchased. (Note: Peachtree Rides is not offering $5 off coupons this year). The fair will open Wednesday, Thursday, and Friday at 5 p.m. On Saturday, Sunday and Monday it will open at 3 p.m. Times are subject to change dependent on weather.

Bay Cagle will emcee the parade and entertainment at Lee Newton Park on July 4th.

Prior to the parade on Main Street at 1 p.m., a brass quintet will perform the Star Spangled Banner at 12:30 p.m. on the Pickens County Courthouse lawn.  After the parade, festivities move to Lee Newton Park at 2 p.m. when the DAV Honor Guard and Marine Corps will present colors, lead the Pledge of Allegiance and perform three-volley salute at Lee Newton Park. Cagle will announce float winners at that time.

Bingo will be held at the Pickens County Chamber of Commerce from 2-6 p.m.

On Saturday, July 2 at 6 p.m. Anthony Hill and Sons of the South will perform at Lee Newton Park.

Sideburners Barbecue will be on festival grounds on July 4. Concessions will also be available at the fair.