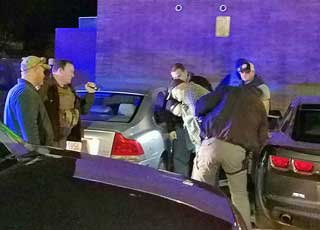 Pickens sheriff detectives and command staff make the second arrest in one week of suspects who came here seeking sex with a minor Friday. Both men had been communicating online with what they thought were teen girls, but in reality was an account operated by a detective.

While Russell Michael King was being handcuffed in front of the Waffle House Friday night, Detective Steven Holmes, a large man with close cut hair and dark stubble introduced himself as “I’m [a name that matches an online profile of a 14-year-old girl].”

King, a 43-year-old from Lavonia, Ga., had found a teen account operated by the sheriff detective; initiated contact, began sexual talk, sent a photo of his genitals and arranged to meet at Waffle House in south Jasper Friday night. He was charged with electronically furnishing obscene material to a minor and child molestation.