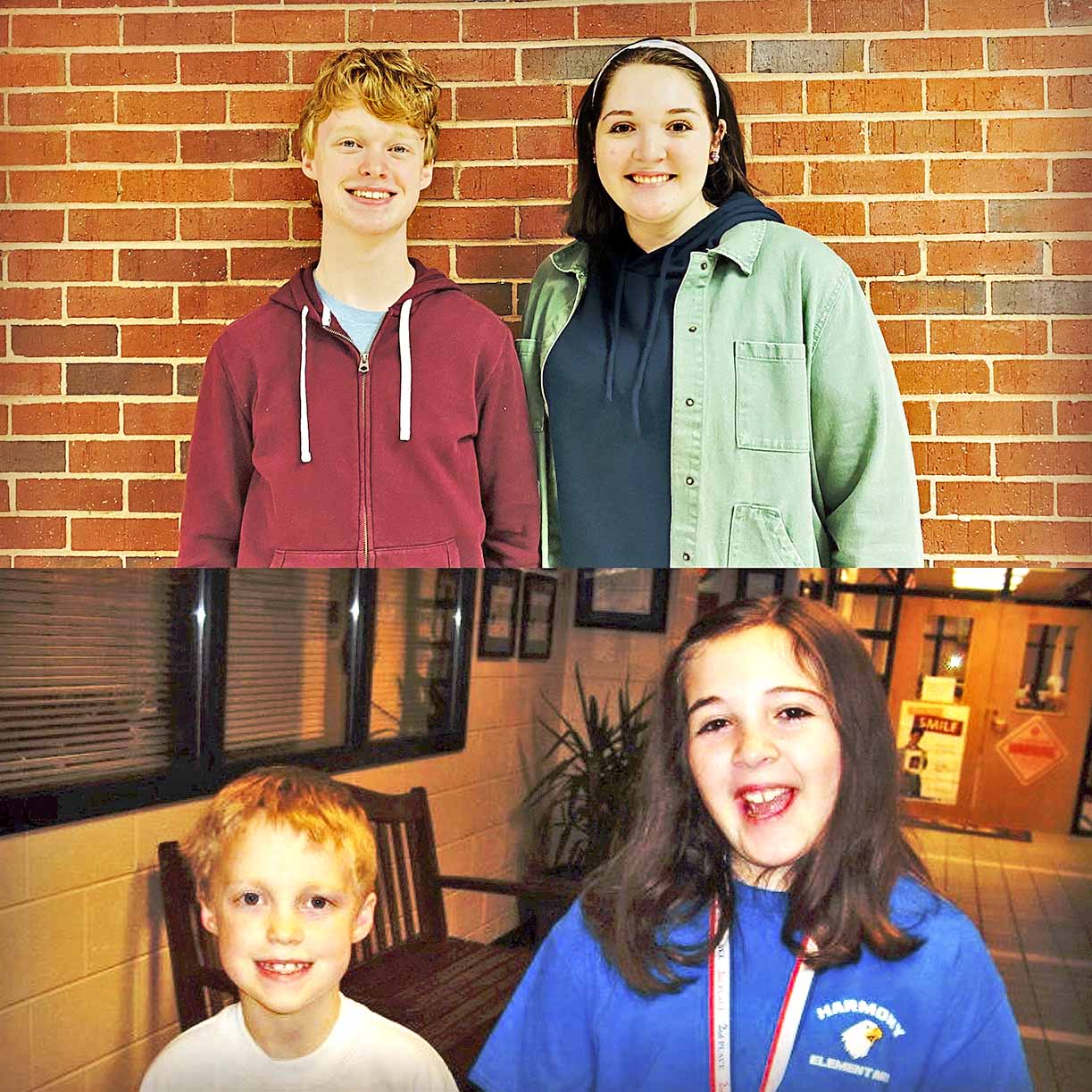 Salutatorian Will Jent and Valedictorian Piper Duncan. A childhood photo shows Jent and Duncan’s academic career together began at the earliest grades.

﻿            Piper Duncan is the class of 2022 PHS valedictorian. Her parents are Stephanie and Shane Duncan. She will be attending The University of Georgia in the fall, double majoring in international affairs and anthropology, with plans to one day attend law school.

Will Jent is the class of 2022 PHS salutatorian. His parents are Stacy and Alen Jent. He will be attending Kennesaw State University in the fall where he will study environmental engineering, with plans to transfer to Georgia Tech.

The Progress sat down this week with valedictorian Piper Duncan and salutatorian Will Jent at Pickens High School to discuss their high school career and future plans.

Q. Where will you attend college?

Q. What will you major in?

Piper: International affairs and anthropology. Will: I’m majoring in environmental engineering. I took AP Environmental Science my sophomore year and it was my favorite class and it inspired me. Just seeing how much damage we’ve caused to our environment made me want to help.

Q. Did you have any favorite classes or teachers at PHS?

Piper: AP Calculus and AP Literature. I really liked calculus because it made a lot of sense to me. Everything really connected perfectly and it was like a puzzle for me. I like how there is one right answer in calculus and there’s a very regimented way to get to the correct answer. Then lit. is almost the exact opposite. Will: I think lit was mostly Mr. [Keith] Petty. Piper: Mr. Petty was our teacher, and he made it fun. We got to choose our essay topics and had a lot of freedom. Will: I liked band. I was in band all four years. Piper: Yeah, I’ll put band on my list too. I’m an oboist. Will: And I play the trumpet.

Q. What did you do to succeed academically?

Piper: I think I just got lucky. Will: Yeah. Neither of us study that much. Piper: I honestly think it’s just something you get lucky with, like natural talent, and obviously a lot of hard work. I think 90% of academics is just memorization. Will: Oh yeah. Piper: And if you’re bad at memorization school’s going to be hard for you. I feel like a lot of our current academic system is based on memorization. Will: If I did have to pick one thing that did help me a lot it was writing down the key facts from class and looking over it for like 10 minutes before the test and that was enough. Piper: I think we got lucky, but we do work very hard.

Q. What are some of your interests outside of academics?

Piper: Well, I do a little bit of everything honestly. I’m involved in like a dozen programs, but mainly I do mock trial because I want to go to law school in the future. I do a lot of volunteer work for a lot of community organizations, like the local library. I do literary team which is actually a GHSA (Georgia High School Sports Association) event. Basically, I did international extemporaneous speaking…I won state champion. [Note: Piper put in the order for her championship ring on the day of the interview]. Will: My extracurricular list is just one – band. But outside of school I have one main hobby that I really like to do. I have a 3D printer and I like to 3D model stuff. I actually took a summer class in eighth grade to learn 3D modeling [a Duke TIP class]. My favorite things to print are useful stuff. I’ll just find something around the house and think ‘I could 3D print something that will make this so much more convenient for me.’ That’s what I like to print, but I obviously print stuff that I find cool too.

Q. What are you most excited about post high school?

Piper: I’m most excited for the classes I’m going to be taking. I’ve been obsessed with anthropology since I was in third grade, and I never thought that I’d be able to do it because it’s not necessarily a viable career option, but the fact that I got a full ride and can double major means that I can take anthropology classes. I also need to minor in a language for my degree and right now I’m thinking Korean. It’s just so exciting to be taking classes that would never be offered in a high school setting. Will: For me, it’s similar to her, I’m just excited to learn about stuff that I’m actually interested in. I’ve been interested in engineering for so long, but you don’t really get to do that in high school and I’m just excited to learn and apply what I know to the real world.

Q. Who has been influential in your life outside of school?

Piper: Jessica Cantrell, George Weaver Jr., and John Luke Weaver, who were my three mock trial coaches throughout high school and they did a lot to help me.Will: The person who has been most influential in my schooling has been my sister, Kaileigh Jent.

Q. Do you have a high school memory that will stick with you?

Piper: Most of our high school memories center around band. Band has consumed our lives for the past four years. Will: And it’s where our friends were.