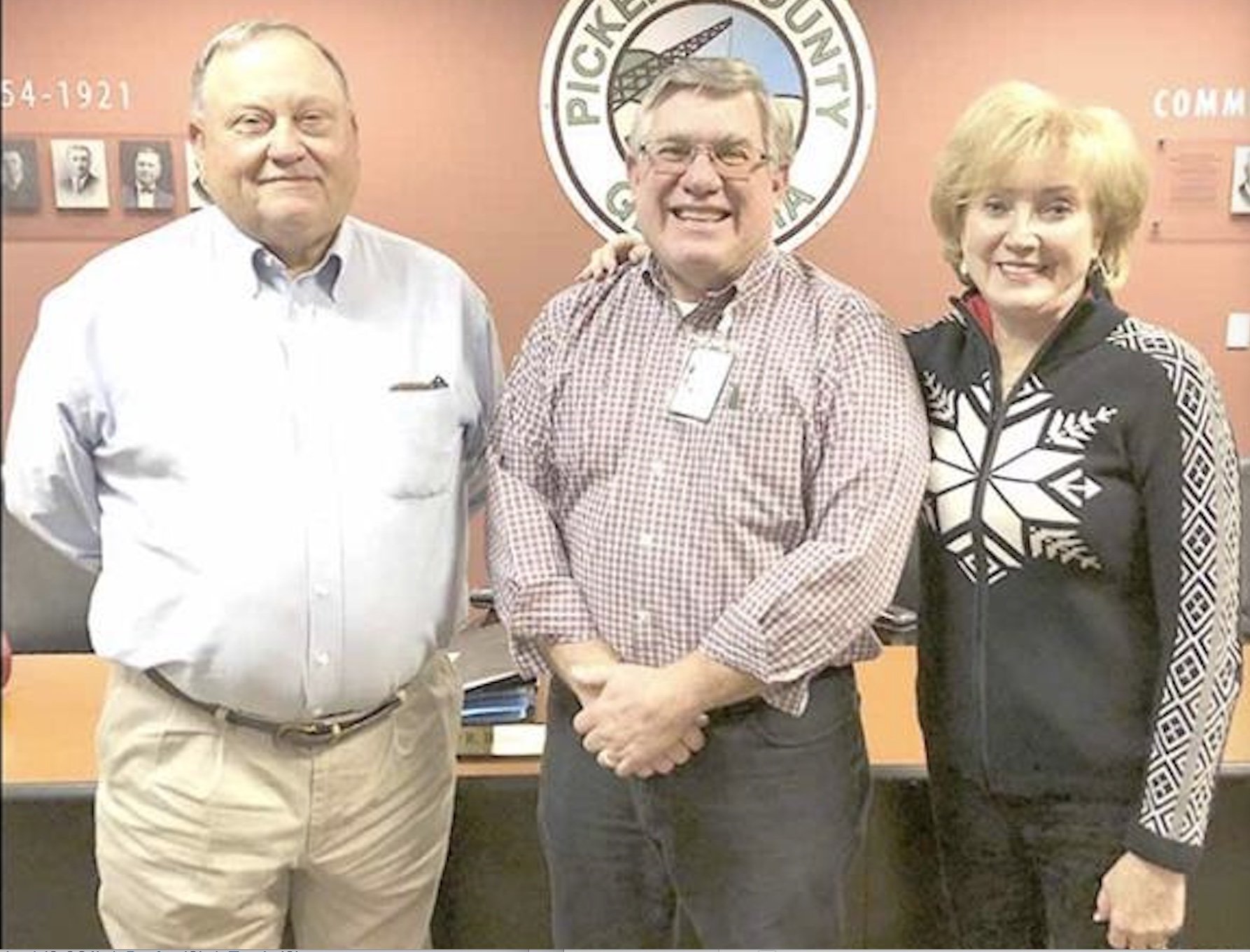 Commissioner Jerry Barnes, left, served for many years as district commissioner and was involved in numerous other groups. He is pictured with former Pickens Commissioner Rob Jones and former District Commissioner Becky Denny.

Jerry Barnes – A life of service to Pickens County

As I sit in the Hinton clubhouse writing this, I see the faded numbers on the floor for the many cake walks/BBQs Jerry participated in and raised so much money for local causes. The many meetings we had in the clubhouse for so many organizations.

I looked back at his service, a man who was consistently looking for partners to make Hinton and Pickens County a better place to live. He did that.

Jerry loves people. Starting early in the morning at Bojangles with the regulars and then later in the day at Hinton Milling, to keep up with the news of the community and make sure the needs of this community were met as the west end commissioner.

Agriculture is his love after his lovely wife Marsha and family. Jerry participated in FFA in Pickens High School and is active to this day. He started the Pickens County FFA Alumni in the early 80s and had the vision to take an out-of-date tennis court and transform it into the first barn for vocational agriculture. The Pickens FFA alumni under his long leadership is one of the largest and most effective in the state.

He helped me, when I was the County Agent, start the Appalachian Cattlemen’s Association in the late 80s and was its treasurer forever and a consistent leader in the cattlemen association.  He helped the cattlemens association acquire cattle-working equipment to safely keep our animals healthy.  He organized and conducted over 30 livestock shows and helped create the very important Youth Scholarship Program.

Jerry has been a critical leader in starting the Hinton Fire Department station along with many volunteers. He built a building, got a fire truck and trained to protect the community he loved /lived in. The Hinton Fall Festival has grown to be a great fund raising event for the fire department. It has the best cake walks in the land and his BBQ is always perfect, all this to fund the beautiful fire station and Hinton to this day.

Jerry and his friends in the fire department were and are still always first on site during the tragedy of life when a house burned, car accidents, and the tornadoes that struck to help and comfort.

Jerry believes in kids and has always been willing to invest in them and created different scholarship programs to help students. I would estimate that he raised over $100,000 over the years to further the education of Pickens and area kids.

Jerry loves livestock programs. He helped me start a lamb showing club when we were both young fellas. We had a ball showing them everywhere in Georgia. Jerry loved the hunt for the perfect calf or lamb for a kid to raise and show. He went all over north Georgia and beyond looking for that animal. He wanted to see our youth have success and learn.

Jerry loves selling his sweet corn and watermelons at his stand in Hinton. He brought in the use of the new super sweet corn varieties for everyone’s enjoyment. It was fun to sit and visit with him at his fruit stand where many new to the area learned from him the history and traditions of the area.