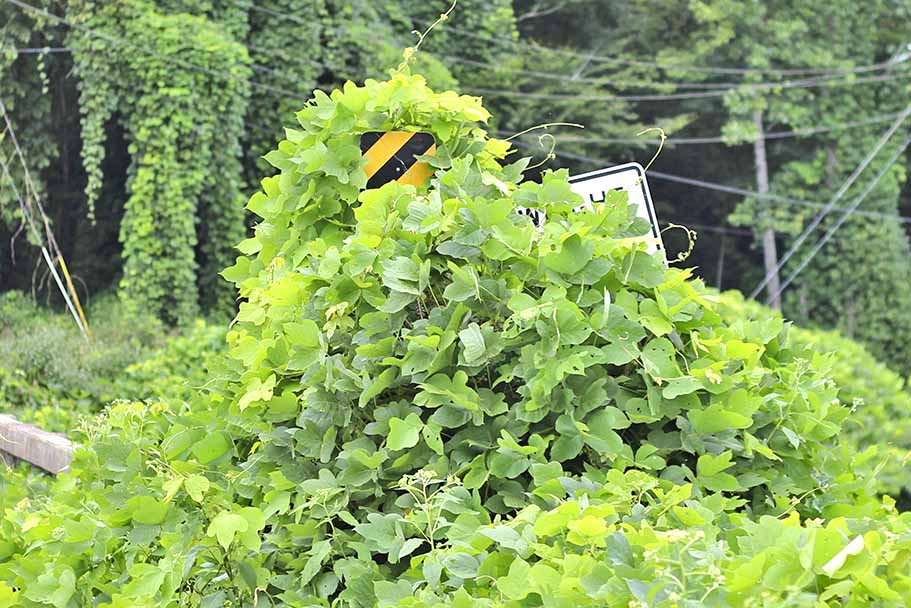 photo/Damon Howell A speed limit sign of Cove Road near the bridge over Long Swamp Creek is nearly covered in kudzu.

Kudzu’s more than a southern thing

A look at economic impact of hated vine

Kudzu is synonymous with the south, its fast-growing vines and broad leaves well-rooted in the region’s landscape, culture, and art. Kudzu conspicuously lines roadways in deep southern states like Georgia, creating those inimitable formations as it climbs and overtakes hillsides, trees, and powerlines – swaths of green punctuated by organic spires that look like creatures frozen in time.

So many southern artists, such as the renowned poet James Dickey in “Kudzu,” have ruminated on the plant and its significance in our collective southern mythos.

Which rear, half out of leafage

As though they would shriek,

In addition to integrating it into our art, like locally when the Pickens Arts & Cultural Alliance used its sturdy vines to make the world’s biggest kudzu basket, southerners have come to accept it as part of life and use it in practical applications, too. We make jelly out of it. We make furniture. We name things after it. But kudzu’s cultural significance here is sordid, an invasive weed now infamously known as the “vine that ate the south.”

Since it was introduced, the plant has consumed thousands of acres of land with its voracious appetite for growth; that, coupled with favorable weather conditions and few natural enemies. Some estimates found that kudzu covers over 7 million acres in the U.S., while others are more modest – but there’s no question that outside of its more romantic impact in our arts and culture it creates a quantifiable strain to some sectors of the southern economy.

But it wasn’t always that way.

From fame to infamy

In his poem, Dickey refers to kudzu as a Japanese invader, but it originally came to the U.S. innocuously in 1876 at the World’s Fair Centennial Exhibition in Philadelphia. For decades after its official arrival, the vine – called “Kuzu” in Japanese – was used little more than a way to shade porches. It wasn’t until the 1930s that U.S. leaders weaponized it and identified it as a way to combat soil erosion, a major issue for farmers at the time. The 1933 Congress founded the Soil and Erosion Service and an aggressive pro-kudzu marketing campaign was launched. In the 1940s a popular Atlanta-based radio host, Channing Cope, founded the Kudzu Club of America, which gained over 20,000 members and strived to plant over 8 million acres of what was being lauded as the “Savior of the South.”

In “Kudzu’s Invasion Into Southern United States Life and Culture” by Richard Blaustein, cited by the U.S. Department of Agriculture, he writes that “Throughout the 1930s and 1940s, the Soil Erosion Service and its successor, the Soil Conservation Service, touted kudzu as the remedy to the south’s soil problems. In a little more than a decade, these agencies provided ‘about 84,000 kudzu seedlings…to southern landowners for erosion control and land revitalization..[and it] offered up to $20 per [hectare] as an incentive for farmers to plant their land in Kudzu.’”

Some areas of the commercial industry also backed the push for more kudzu and at one time it was sold in mail-order catalogs. It was estimated that kudzu increased in number of planted acres from 4,000 hectares in 1934 to 1.2 million in 1946.

If only they knew then what we know now.

Eventually, around the 1950s, farmers and the government became concerned about kudzu and its “uncontrolled growth, its smothering of pine trees.” In ideal conditions it can grow a foot a day, with stems that can reach four-inches in diameter to depths of 3-16 feet. In a sluggish fall from grace over the course of several decades, kudzu was removed from the Department of Agriculture’s suggested plant cover list in 1953. Then in 1970 it was identified as a common weed. Then in 1997 it made the federal noxious weed list. In 1999, Time Magazine ranked the introduction of Kudzu to the U.S. as one of the 100 worst ideas of the century.

But by that time kudzu already had its tendrils deeply rooted in our southern landscape.

From forests to real estate to powerlines; kudzu’s impact locally

Troy Clymer, Georgia Forestry Commission Associate Chief of Forest Management said kudzu will “shade out” trees, cutting off their source to the sun and killing that tree’s ability to photosynthesize. At the time of Blaustein’s paper in 2000, it was estimated kudzu did $100 million in damage in the U.S. with another source estimating $336 million in lost productivity in forests. He noted that kudzu grows on the edges of forests because it needs plenty of sunlight.

Locally, Amicalola EMC forks out a significant amount each year to mitigate kudzu from their right-of-way system, which includes Pickens and areas in surrounding counties.

“Our [right-of-way] department marks the areas of concern for kudzu on our mapping system and treats those areas once per year,” said Amicalola EMC’s CEO Todd Payne. “The estimation of time and materials around kudzu would be approximately $100,000 per year.”

AEMC crews treat their problem spots in the summer time, which has gone a long way to reduce power interruptions the vines can cause if they overwhelm a line.

“We hand cut some areas, mow some areas, and spray some areas,” Payne said. “It has been several years since we have had an outage due to kudzu. It used to be more of a problem before we started a program and that’s been at least 10 years ago.”

Local realtor Lamar Cantrell of Cantrell Realty, who has worked in the area for many years, identified Burnt Mountain Road, Highway 136 East, Highway 108, Waleska, and Marble Hill as some of the major kudzu hotspots – and like Georgia Forestry said they grow primarily on the sides of roads to get sunlight.

“I’d say the majority of it is in Marble Hill and Burnt Mountain Road,” he said.

Kudzu can also potentially make a property less desirable for potential buyers, and make owning property with kudzu on it a hassle. Cantrell wouldn’t fathom to guess an actual dollar amount kudzu can have on a property’s value, but said it can certainly create issues.

“There are too many other variables to say specifically how property value is impacted, but it definitely has a negative effect because of the fact that it creates a chore to manage it,” Cantrell said. “Still, I’ve sold a lot of property with kudzu on it. The value is what someone will pay for it – you just have to manage it, but it can definitely be done. I’ve done it on my own property.”

Cantrell said kudzu has recently come up as a point of discussion during negotiations for property, but also said that over the last two years “land sales have been on fire. Kudzu is definitely not a deal killer – and I’d take kudzu over bamboo any day. Bamboo is a much bigger issue to me.”

Goats? Herbicide? Hand cutting? Controlled burns? Managing kudzu is not for the faint of heart, but Cantrell and others say it is possible – it just takes a few years.

Cantrell will offer advice to potential buyers considering property with kudzu on it. He likes a product called Transline “which is pricey, but it only kills kudzu, mimosa, and locust – not grass.”

The first year will take care of surface level vines, he said, then year two will take care of plants that were shaded the first year, and year three will knock out overlooked sprigs and new growth. He also recalled a high schooler, the “Kudzu Kid,” that invented an effective way to treat kudzu by injecting helium into the soil. His invention was a result of researching how gasses on Mars affected plants on Earth.

“Landowners’ biggest challenge is controlling kudzu when they are trying to establish or re-establish a forest through natural regeneration or tree planting,” he said. “Typically it’s an ongoing process that takes three to five years to control and eradicate from a site – [and] may still require some monitoring and attention as time goes on to mitigate re-establishment.”

“When landowners call we come in and work with them and take a look at the property and based on their objectives for use give recommendations,” he said. “The forestry commission does not spend any money actively mitigating kudzu. Our efforts with kudzu are through education, landowner meetings, and providing resources (list of contractors, advice, handouts, documents, brochures, etc…) to help the landowner meet their management objectives for their property. The landowner would spend money on the herbicides and spray the kudzu on their own, or have a contractor come and do the service for them.”

Landowners who want to try to get a hold on the vine that has secured a solid legacy for itself in the south can visit the Georgia Forestry Commission at www.gatrees.com for more information and for contact info for a forester near them.