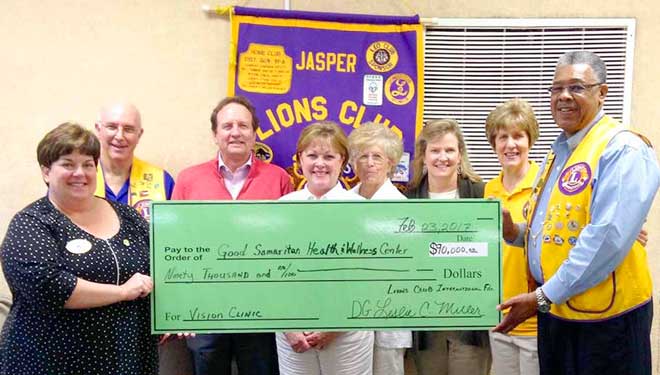 On February 23rd, the Jasper Lions Club completed a project at least three years in the making. The civic organization presented a $90,000 check to the Good Samaritan Health & Wellness Center for their Vision Clinic. This grant was made possible by the Lions Club International Foundation (LCIF), the charitable arm of Lions Clubs International.

In September, the Jasper Lions Club donated $10,000 to Good Samaritan Health & Wellness Center. That donation along with the $90,000 grant bring a $100,000 gift to the local clinic, which provides services to the medically underserved. A private foundation that wishes only to be known as “a friend to Good Sam” will match both gifts and bring the total donation to $200,000.

Founded in 1968, LCIF was named the  number 1 non-governmental organization worldwide with which to partner, according to a Financial Times independent survey.  They had the highest percentage of donated dollars going out for community relief and betterment.

The Lions Club donation is designated for Vision Center equipment. The additional private money is unrestricted.  “We’ve had a lot of people working on this,” said Jasper Lions Club President Dr. Ken Austin. “Worldwide vision is a big focus of the Lions Club.”

The Lions Club donation will go towards construction and outfitting a new building that will house the vision center.

“This is going to allow us to better equip our vision center with more modern equipment,” said Good Sam’s Executive Director Carole Maddux. “We are very appreciative of the local Lion’s Club and Lions Club International.”

The vision center is currently dependent on volunteers like Dr. Gilbert James to run the facility, which means hours are more limited than Good Sam would like them to be. Maddux said Dr. James has been the “backbone” of their vision services since at least 2004. She added that Good Sam is always looking for volunteer optometrists and hope paid staff can be an option in the future.