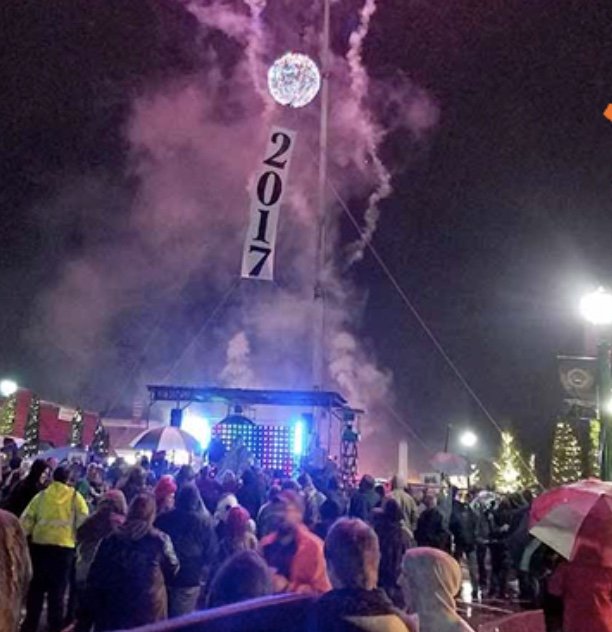 A shot from a previous NYE celebration. The city of Jasper organized the event beginning in 2012, then decided not to fund it in 2017. The Jasper Merchants Association took it over but has decided not to take it on this year, citing low attendance and cost.

Eight years after Jasper’s inaugural New Year’s celebration, the event will not return this year as organizers cite low attendance and cost as key party-poopers..

“It’s just got to the point where it wasn’t worth it and you have no one show up until 11:30 at night to watch the countdown and ball,” said Haley Bouchie, president of Jasper Merchant’s Association. “It was a lot of work and money for not a lot of benefit.”

There was no New Years celebration in 2020 due to the COVID-19 pandemic.

The Jasper Merchant’s Association – which also organizes the Night of Lights Parade, Main Street trick-or-treating, and the BooHoo Scarecrow contest – wasn’t always in charge of the downtown NYE celebration. Jasper’s inaugural New Years event was in 2013 under direction of the city of Jasper and the Pickens Chamber of Commerce. At that time, it was thought that it would be a big draw due to it being the only “street” event with a ball drop in the area. The first year saw big crowds, enough for the mayor at that time and Chamber officials to commit to hosting again in the future. That year they spent an estimated $16,000 – but as the years progressed crowds dwindled, dissuaded by some blustery cold nights and other issues.

Bouchie said a few years ago the Jasper Merchants Association took over the event when the city decided they would no longer host it. Jasper Mayor Steve Lawrence said for 2021 he has not been contacted by any other group at this point about taking over the celebration, and that the city does not have plans to host it at this time.