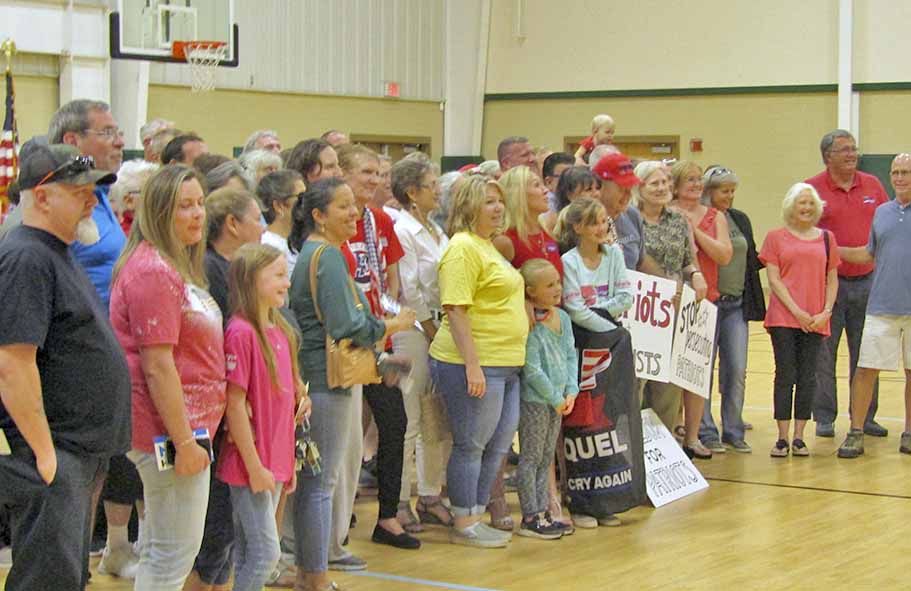 Some of the approximately 100 supporters of Marjorie Taylor-Greene who gathered around her for a photograph after hearing her speech on issues ranging from the Afghanistan withdrawal to the Green New Deal.

Marjorie Taylor-Greene asks for prayers in these times of crisis 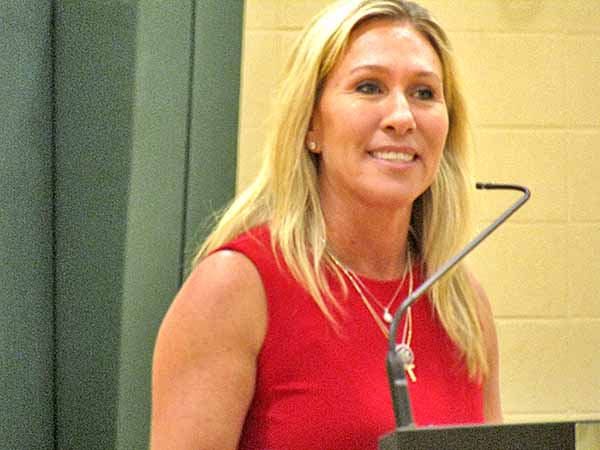 Congresswoman Marjorie Taylor-Greene, when speaking in Jasper on September 9th, encouraged her supporters to “keep on praying,” adding that millions of Americans are “praying the same prayers as you.”

Although considered a pariah by much of the Washington establishment, a large majority of her constituents think of Marjorie Taylor-Greene as a true “patriot.”

The 14th District Republican Congresswoman spoke to a group of approximately 100 supporters on Thursday evening, Sept. 9th, at the Robert P. Jones Community Center. The event was sponsored by the Pickens County Republican Party.

Speaking for nearly an hour, Taylor-Greene addressed a number of issues to the approving nods and applause of her gathered supporters.

Taking to the podium at center court barely two hours after the announcement of the Biden administration’s new vaccine mandates, the Congresswoman disagreed with President Joe Biden who said about the new mandates, “This is not about personal choice and freedom.”

Taylor-Greene encouraged governors not to comply with his “unconstitutional mandates” and added that she had received a personal pledge from Georgia Governor Brian Kemp that he would resist and not comply.

On the topic of the recent Afghanistan withdrawal, Taylor-Greene said, “Joe Biden pledged ‘to leave no American behind,’ but he broke that pledge.” Noting the administration had “armed the Taliban with $83 billion dollars worth of American weapons.”  Taylor-Green said that under the Green New Deal’s emphasis on battery power, America would become totally dependent upon China which controls 80-percent of the lithium market, a necessary raw material in the manufacture of batteries.

After announcing that she had introduced in Congress articles of impeachment against Joe Biden, her supporters were delighted when “Impeach Biden” bumper stickers were distributed to those gathered.

She also said that as she travels around the country, people express the same concerns to her that she hears from her constituents and added that millions of Americans are “praying the same prayers as you.” Taylor-Greene related a recent conversation with one of her friends, country music legend Jon Rich, and contrary to what might be expected that the conversation would center on music, she said, “We didn’t talk about country music, but instead, we talked about the country.”

After declaring, “We can’t pass the torch of freedom to the next generation if we don’t have it anymore,” the Congresswoman, who is a devout Christian and who often invoked her faith during the speech, urged the crowd “to keep praying.”

Marjorie Taylor-Greene’s 14th Congressional District encompasses northwest Georgia including the western half of Pickens County. The remainder of the county falls within the 9th District which is represented by Republican Andrew Clyde, an Athens, Ga. gunshop owner and a retired Navy SEAL.