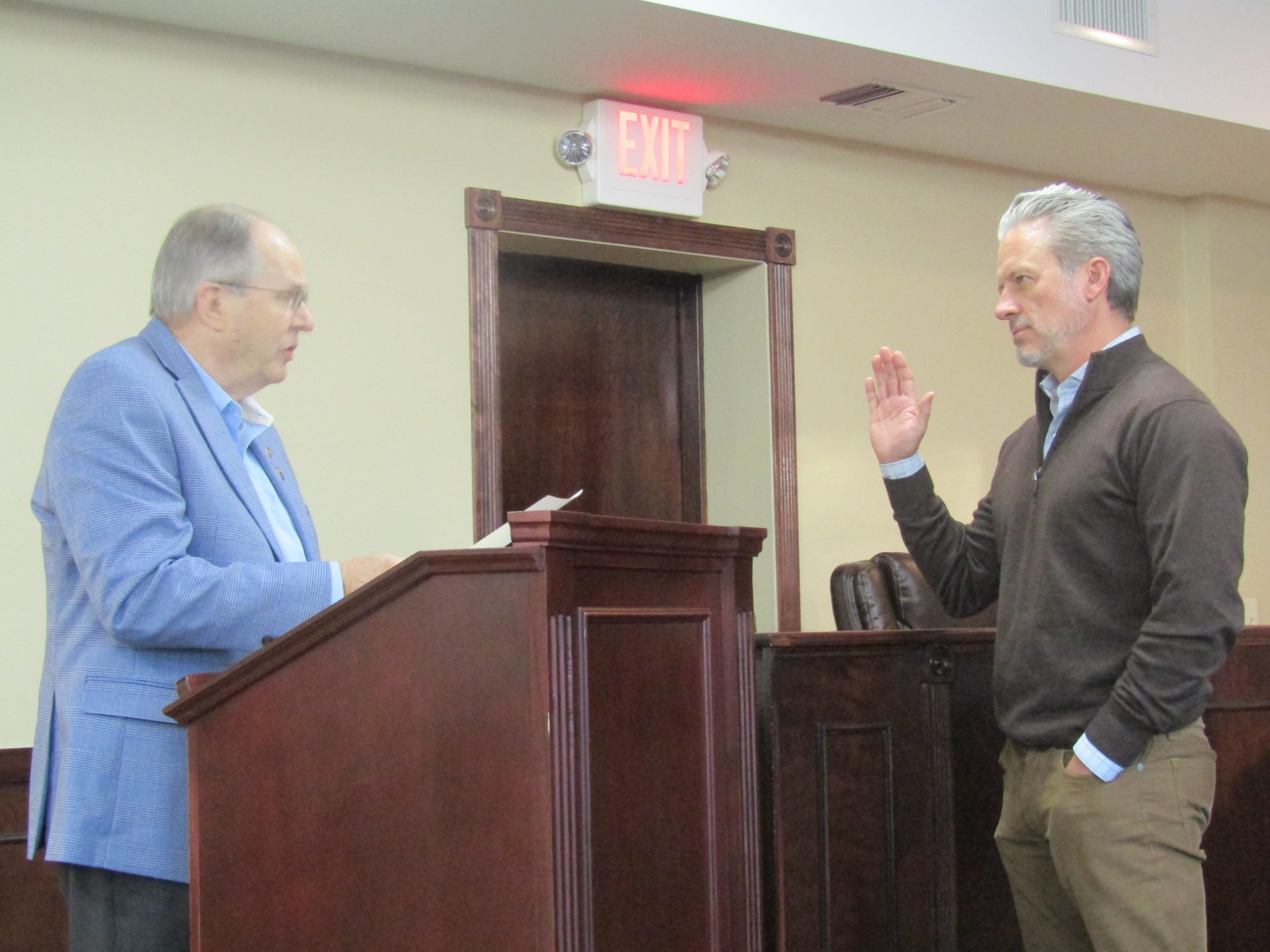 At the DDA meeting, Mayor Steve Lawrence presided over swearing-in ceremonies for Parish Lowrie who has been reappointed to the board.

Second Saturday events on the radar

During their first meeting of the new year, the Jasper Downtown Development Authority discussed their initiatives for 2022, including new plans for a monthly event to be held on the second Saturday of each month.

The Tuesday, Jan. 11 meeting began with a swearing-in ceremony for two DDA members, with Mayor Steve Lawrence officiating. Those members were Parish Lowrie, who has been reappointed to the DDA, and Kirk Raffield, who is new to the board.

According to DDA Chairman Jack Dunn, plans for the Second Saturday events, which would run from May through August, could include renting a stage for musical performances. Dunn and Raffield recently met with Zelinda Hardy of Cherokee County who specializes in organizing such events and has helped with some of these same type events in Canton. Dunn said the price of renting a stage would be approximately $2,400, and the cost of hiring bands would vary between $3,000 and $6,000. Vendors would be invited to each event and charged a proposed $30 fee to sell their wares.

After some discussion, Raffield made a motion to table discussion for the Second Saturday events until a later meeting. His reasons were for purely “housekeeping purposes,” citing that the DDA has only recently been reorganized and the extra time would allow the “setting up of by-laws and getting rules and regulations in place.” The motion carried with no opposition.

The DDA also discussed an upcoming work session/retreat which chairman Dunn said would take place in the very near future. He is hoping to invite Tara Bradshaw, an Economic Development Specialist with the Georgia Department of Community Affairs, to attend the session to lend her expertise. Dunn then opened the floor for discussion among members as to what they wished to accomplish at the work session, to which Parish Lowrie replied, “I hope we can define our scope and purpose.”

As to when would be the best timeframe to hold the work session, after some discussion, the authority members decided on the dates of February 23rd through the 25th. Another motion was made by Raffield authorizing chairman Dunn to continue his contact with Bradshaw in his efforts to schedule the session. This motion was also approved.

The chairman then called upon the various committee members for their reports.

Amy Leake reported that Instagram and Facebook accounts had been launched and were “up and running,” to which fellow Social Media Committee member Dave Garner added that their Facebook account already had over 100 followers. Representing the By-Law Committee, Parish Lowrie stated that the by-laws had not been amended “in quite some time” and that “they badly needed to be updated.”

Leake and Marty Callahan, members of the Business Development Committee, both commented on the progress of their committee. Callahan said he hoped the upcoming work session would help to determine “What’s to be our role.” Leake said that they recently had a “great meeting” with Mayor Steve Lawrence and was looking forward to “getting the ball rolling.” She added that they had received some input from the community resulting in a number of good suggestions.

Dunn updated the members about a recent meeting he had with Brittany Pittman of Appalachian Regional Development. He said the meeting “gave us an opportunity to discuss what we can do in the future,” and he added that, according to Pittman,” There’s more money available to us.”

Chairman Dunn reported on his consultations with the Jasper Merchants Association about changing the date of the annual downtown Christmas parade. This year’s parade was described as extremely successful with a large number of participants and spectators. However, parade sponsors believe the event would have been even more successful had it not coincided this year, as it has in previous years, with the Southeastern Conference Football Championship game. This year’s game, which pitted the eventual National Champion Georgia Bulldogs against the Alabama Crimson Tide, naturally proved to be of great interest to many local residents.

Plans are to move forward with changing the parade date from the first Saturday to the first Sunday in December. Dunn noted this date would not conflict with other popular area holiday parades, saying, “Ball Ground’s parade would fall on Friday night, the Holly Springs parade on Saturday, and then our parade on Sunday.” Jasper’s parade would hopefully become the climactic weekend event. Ironically, Dunn said the only pushback he has received has come from football fans who pointed out the Jasper parade would then conflict with NFL football games. Chairman Dunn closed the meeting by telling his fellow downtown development members, “I appreciate y’all’s efforts in what we’re trying to do.”