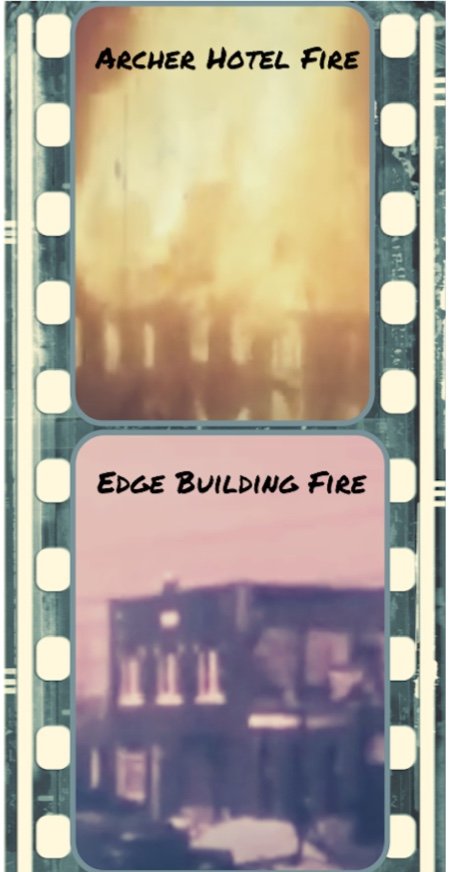 As part of my family resided in Whitestone during the 1940s, I have been trying to find pictures and videos that represent Pickens County in that era.

Also with my work with the Pickens Historical Society, which manages the Old Jail on Main Street, and with Bethany-Salem Fire Department, I keep an eye out for public safety history as well.

While this is ongoing and frankly a difficult task, I have found a handful of interesting videos on YouTube that are accessible to everyone.

Probably the most dramatic are the fires at the Edge Building (Main Street location of the Pickens Progress) and the Archer Hotel (where Walgreens now sits on E. Church Street).

Another interesting video is the program of the Burnt Mountain Hill Climb in 1952 that was put on an Atlanta sports car racing club and the local Jasper Lions Club. It unfortunately doesn’t contain any live action, only scans of the pages, posted by Jim VanSant. It is an interesting trove of local businesses and names as well as information on the cars used. From what they handed out, I can only imagine it was a quite a sight. Perhaps our Lions Club or some other group could resurrect this car race up the mountain?

The WSB-TV December 1967 6 p.m. news broadcast has a snippet of local news during the hour-long program. But in general it shows the news as it was before ESPN and even had two sportscasters including Milo Hamilton, the Braves play-by-play person before Ernie, Skip and Pete. Even the ads give a certain luster with ads from Rich’s and banks from the past. I have to give caution as it may be sensitive to some individuals, but it is true history as it was in a tumultuous time.

These great peeks into the past are from Jim VanSant and his family with notable exception the WSB-TV which was housed by University of Georgia.

Edge Building fire cleanup – In the 1940s, shot by Paul VanSant, who had a dentist office upstairs in the Edge building. Video is less than three minutes long and shows some good views of Main Street and the former county courthouse, which burned later.

Speculation at the time is the draft office for World War II was upstairs in the Edge building, which also had all the ration cards allowing purchases of war restricted items and were quite valuable and the fire was cover up over the theft of the cards.

Archer Hotel fire –  This one, another from Paul VanSant, is less than two minutes long, but shows a massive blaze that demolished a hotel that stood where the Walgreens in Jasper now sits. The video information notes the exact date is not known, but this structure was replaced by the Archer Tourist Court, which later became the Greystone Village.

This film was made in Jasper by Dr. Paul Vansant who was a dentist in Jasper.                   It shows planes coming and going from an airfield and people milling about. At the six minute mark is, Dr. C. J. Roper, and his wife Helen. He had and built Roper Hospital in Jasper, that was for many years the only hospital in Pickens County.