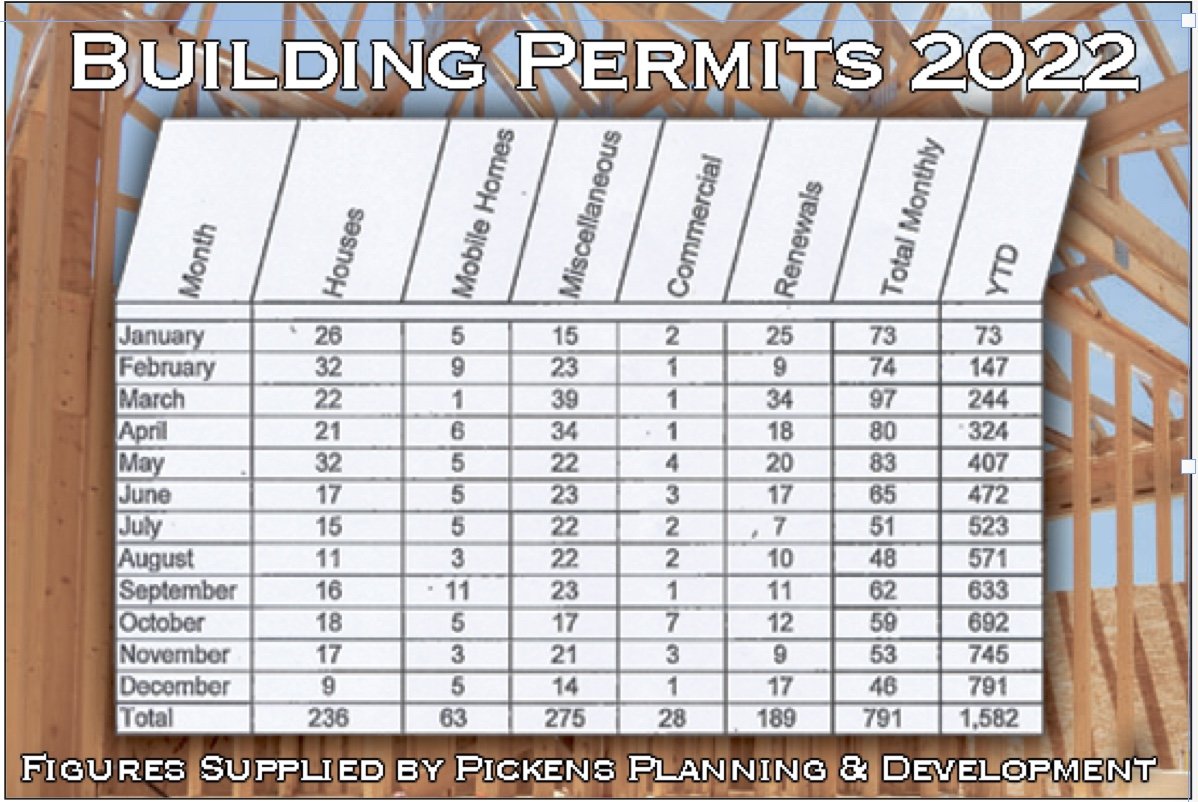 County permit numbers presented at the January Board of Commissioners’ meeting.

As part of the most recent commissioner’s meeting Thursday, Wes Frye, planning director for Pickens County, noted that December had been a very slow month but the year as a whole will still see 7 percent growth in revenue generated from permits and inspections through their office.

In a follow up interview, Frye discussed the permit numbers, which show clearly some frustrating conditions in the homebuilding industry.

Overall for 2022, the county issued 236 permits for site-built homes. The county also issued 63 permits for mobile homes; 275 for “miscellaneous”; 28 commercial permits; and 189 renewals. Miscellaneous is for remodeling or any time a permit is needed.

Frye said mobile homes have really rebounded as a housing option since the COVID period. He cited three causes for this: 1. The price of regular homes has skyrocketed with heavy demand 2. The demand has made it very hard to find any available traditional homes for sale or have a new home built without long delays. 3. There has been a significant improvement in the quality of mobile homes.

But with the higher prices, Frye said the construction of the mobile homes has gotten much better. “They are put together well,” he said. However, he cautioned that mobile homes are now becoming harder to find.

Frye said their numbers, particularly the number of renewals, reflects the frustration many home buyers and builders are seeing. People simply can’t finish homes inside of one year and Frye said three years on some homes isn’t uncommon.

There have always been people who take a “go as you can pay” approach and will accept renewing permits. But they are seeing more people whose home construction process has simply ground to a halt.

Frye said the delays often go directly back to supplies, particularly doors, windows and pipes of all kinds being very hard to get right now.

“We have people saying, ‘the price of metal has gone up so much, we are going to have to redo our loan,” he said. And some of these will stop construction hoping that prices will drop.

Overall for 2022, planning and development issued 2,271 permits/licenses or other bits of business and oversaw 2,493 inspections generating a total of $537,361 in revenue for the county. December was the slowest month for new permits with 46 issued while March saw 97 permits issued.