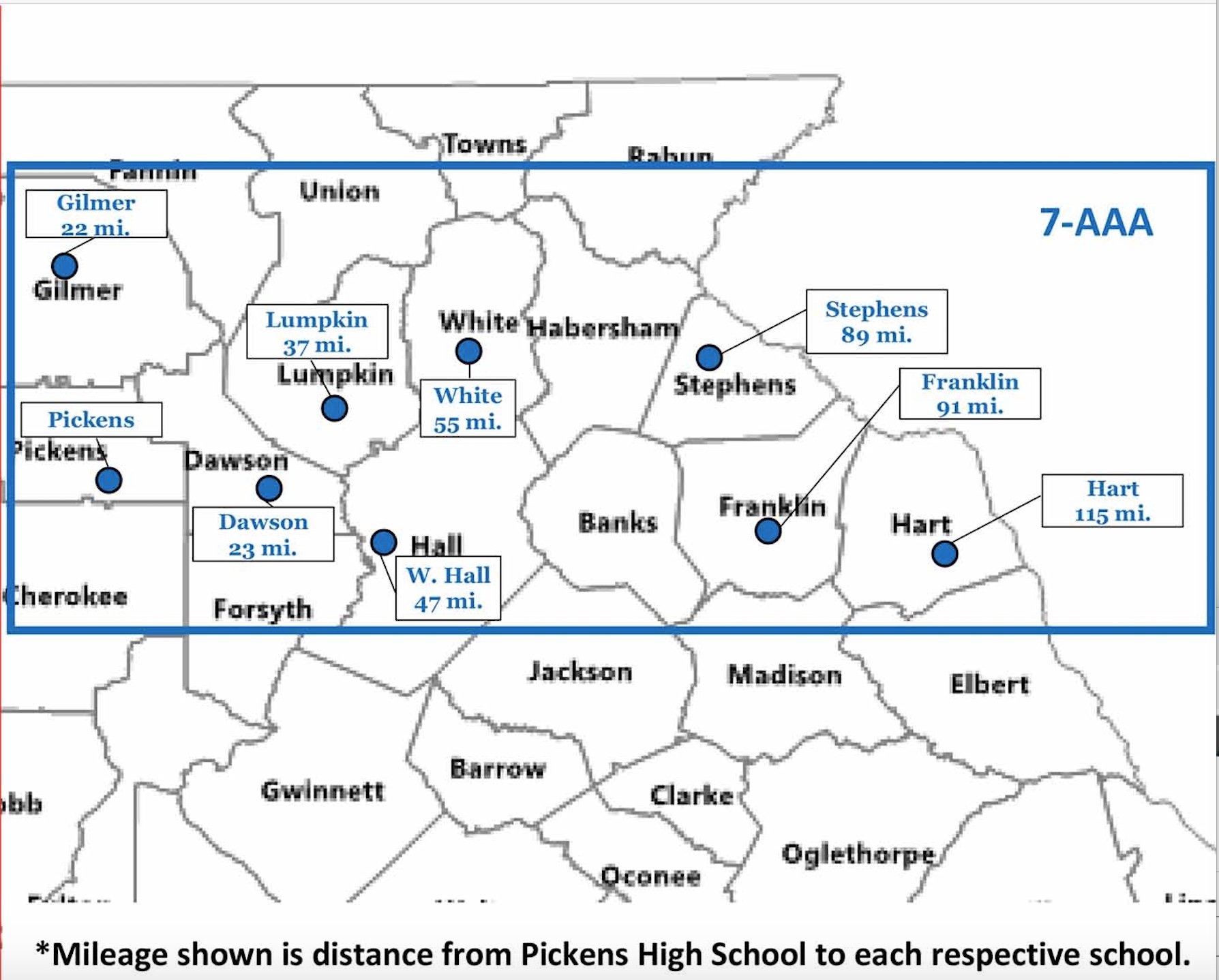 PHS moves from 7-AAAA to 7-AAA

Pickens High School has moved to a new region alignment within the Georgia High School Association. The school will transition from 7-AAAA to 7-AAA in 2022-2023, and remain in 7-AAA for two years.

“We’re excited,” said Pickens High Athletic Director Chris Williams at the November school board meeting. “We’re getting back with some of the mountain schools that some of our kids compete against in K-8…I think it’ll be good for us to make this move. I think our program is moving in that direction with what we see in all of our sports coming up in the next two or three years…I think we’ve got a stretch run here we can make here for several years and we’re really excited.”

Pickens High was the smallest school in the state in 7-AAAA.

“We were told if any schools were to move up, we would be given the opportunity to move down if we chose to do so,” he said. The director noted that the system had prepared an appeal to move down, but that they recently received an email from GHSA that said a school did in fact request to transfer, which opened a slot in 7-AAA.

This will put PHS in the same region with Dawson, Franklin, Gilmer, Hart, Lumpkin, Stephens, West Hall, and White. This change will impact all sports that are part of the GHSA.

“Most of these teams we are very familiar with,” Williams said. “Some of these kids in basketball and rec league football will see some of these teams K-8. Even though it’s 7AAA, it’s mostly what 7AA was back in the mid-90s with all of us mountain schools together.”

Williams called the new alignment a win-win for Pickens and most other teams in the 7-AAA region.

“We look forward to this opportunity for a lot more of these local schools to bring more people with them to our events and then we will be able to travel better to their events as well,” he said. “When we do compete we’ll be able to bring in a little more revenue and it will provide more for our student athletes.”

While many of the teams are fairly close drives, three counties are over 90 or 100 miles away. Pickens board member Tommy Gartrell said the drives to Stephens, Franklin and Hart counties are definitely not ideal, but agreed the new alignment gets Pickens back with familiar teams.

“I don’t think anybody is excited about the three new counties near South Carolina, but we’re excited about everybody else,” Gartrell said. “We do get our traditional opponents back and those are easy trips, but we’re going to pay for it on those long ones. But, it could be worse. I think Region 5 stretches from Athens to Augusta.”