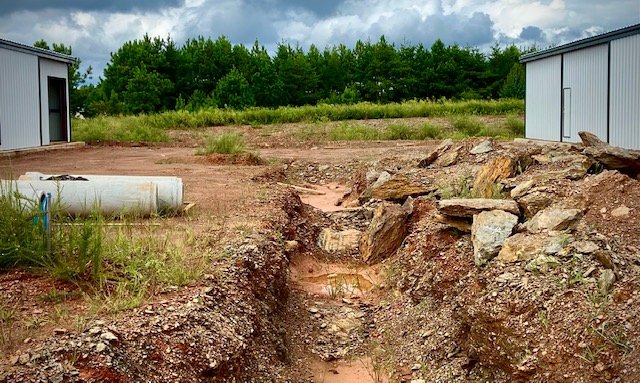 Precision blasting will be needed to remove rock in the path of a sewage pump station line at the airport.

“We will need precision blasting” for the rock, as to not damage the foundations of the three new T-hangars almost completed, said airport engineer Phil Eberly at the local airport authority’s quarterly meeting last week.

The rock was discovered between two new T-hangars as a ditch was being cut to complete the sewage pump station for the horseshoe area of the airport. “We are in discussions concerning liability of blasting the rock,” Everly said. Even with the slowdown the chief engineer believes the 24 new T-hangars and three new box hangars will be ready by Thanksgiving.

Airport Manager Randy Thomason gave a fuel summary, noting 36 jets were serviced in July and August.  The county treasurer’s report shows a Jet-A fuel profit of $46,338 and civilian fuel profit of $38,230 since the first of the year.  Thomason says, ‘customer service keeps pilots coming back to buy fuel and seek a home for their aircraft.”

The main area of business for the authority was to adopt a Five-Year Airport Capital Improvement Program (ACIP) through 2027. The plan is a year off, because the FFA 2022 was part of the current fiscal year in which the Pickens County airport received funds for capital improvements, including a new terminal building which is in the planning stages.

The $13,286,668 program will fund new airfield lighting LED and south terminal apron rehabilitation in 2023.  The 2024-2027 program calls for new security fencing, runway extension to 5,505’, environmental assessment, hangar site preparation and paving,  south hangar area apron expansion, and security fencing completion with property acquisition on the east and west sides. The completion of the improvements planned will be the installation of a Supplemental Wind Cone.

V“We have come a long way in the last six to eight years because of having a plan and following it to the letter,” said Ed Wood, vice-chair of the authority.

Eberly added, “The FFA and GDOT give favorable attention to airports that adhere to their guidelines and complete projects on a timely basis.”

County Commission Chair Kris Stancil said, “I believe were are moving in the right direction developing the airport as a focus area for economic development.”                               The Pickens County airport is on course to be one of the top 10 airports in the state with 129 land based aircrafts with hangar completion.