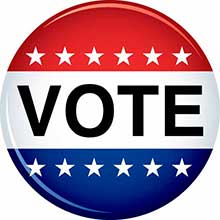 Qualifying for municipal seats next week

The cities of Jasper, Nelson and Talking Rock have numerous seats up for election, with candidate qualifying to be held Monday, Aug. 16 through Wednesday, Aug. 18 from 8:30 a.m. to 4:30 p.m. at the Pickens County Elections Office on Pioneer Road in Jasper. The election will be this November.

City council seats held by Sonny Proctor and Anne Sneve are up for grabs. Candidates must be a resident of the city of Jasper and have lived there for one year. Qualifying fees are $35.

The mayor’s seat, currently held by Sylvia Green, and two council seats, held by James Queen and Susan Johnston, are up for election. Candidates must be residents of Nelson and have lived there at least one year for council members, and at least two for the mayor’s seat. Qualifying fees are $25.

Council seats held by Andrea Watson (Post 1), Tony Hawf, (Post 2), and James Bryant Jr (Post 4) are all up for election. Qualifying fees are $1. Candidates must be a resident of Talking Rock and have lived there for one year.

Pickens’ west district commission seat, currently held by Jerry Barnes, will be up for election in 2022.