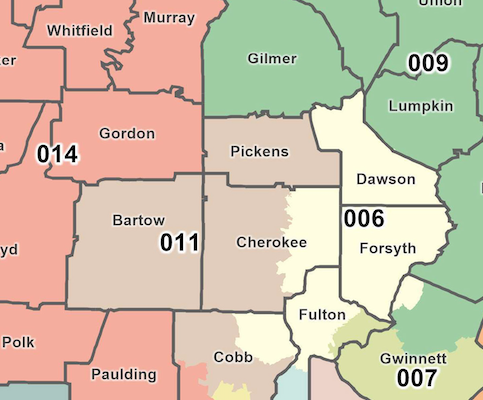 On December 30th Gov. Brian Kemp signed Georgia’s district maps into law, changing the lines for both the state government and for the U.S. House.

It might be a relief to local voters to find Pickens is no longer split in either the U.S. congress or state senate.

According to the congressional redistricting map, all of Pickens County will unite and become part of Georgia’s 11th congressional district where Barry Loudermilk is the incumbent. This is a completely new district for the county after spending many years split down the middle between the 14th and 9th districts.

On the state level Pickens County’s district stays the same in the house with  Rick Jasperse as our local state representative for the entire county. Although the extremities of his district have shifted slightly from the northwest of Pickens to the southeast.

In the state senate, Pickens will also be reunited, completely in the District 51 of Steve Gooch. Previously Gooch had represented the eastern half of the county and Chuck Payne the western part.

Four lawsuits have been filed challenging the redistricting plans, so it’s possible more change could come.

According to Stacey Godfrey at the Pickens County Office of Elections and Registration, it is helpful that the county will no longer be split, making it much simpler to report results and answer ballot questions from voters.

Previously they had to explain it depended on what part of the county you lived in as to which ballot you would see.