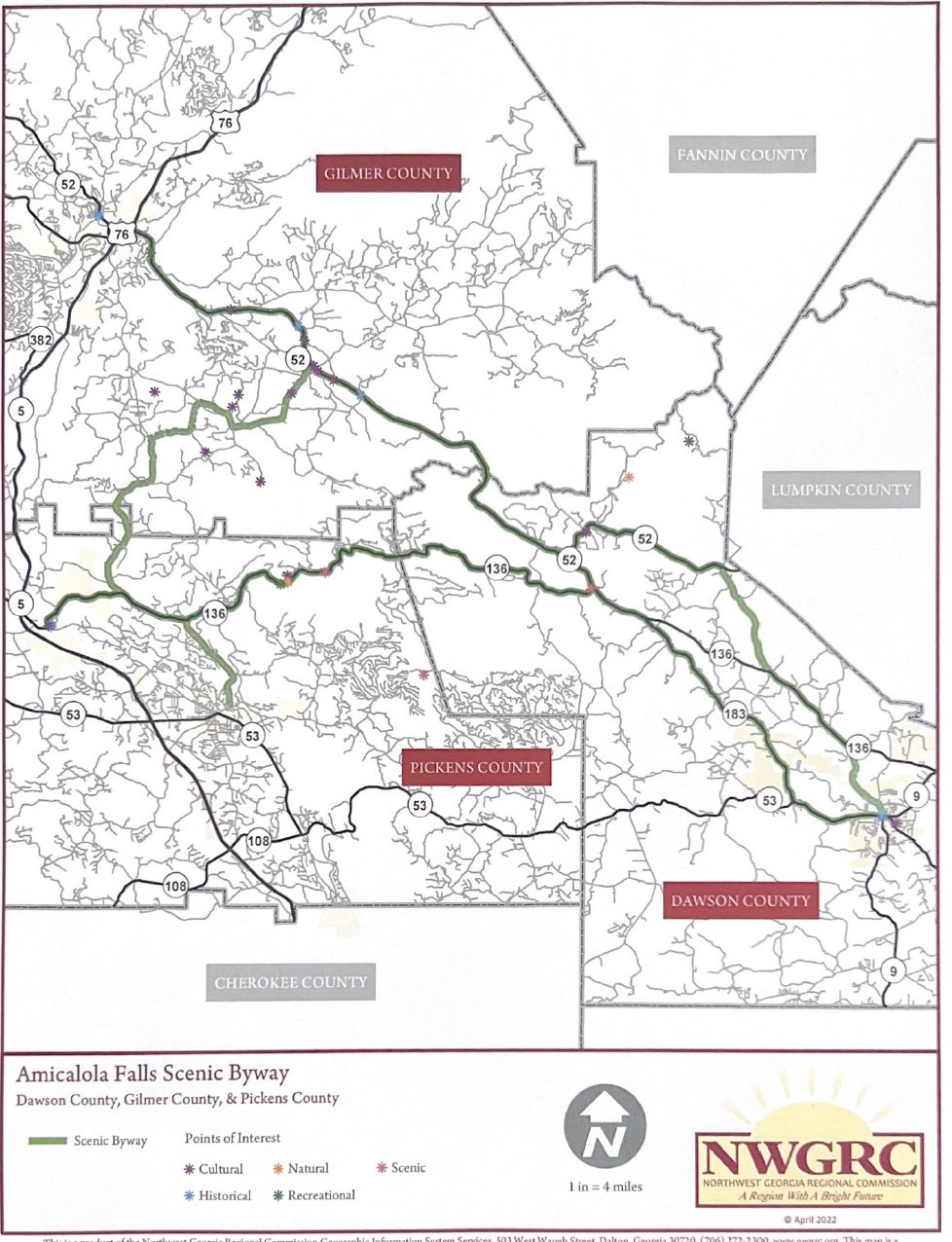 The proposed Amicalola Scenic Byway would be an 81 mile loop stretching from East Ellijay to Dawsonville via Amicalola Falls and reversing over Burnt Mountain to the Jasper area.

“Boosting heritage and cultural tourism and appreciation of the natural beauty of the area” is a part of the reason for the Georgia Department of Transportation’s possible establishment of a scenic byway, a portion of which would traverse parts of Pickens County. The DOT has accepted an application from Dawson, Gilmer, and Pickens County officials to consider the possibility of the scenic byway.

On Tuesday, July 26th, a public meeting about the scenic byway was held locally at Fainting Goat Vineyards, off Highway 136. The meeting was chaired by Janet Cochran of the Northwest Georgia Regional Commission, the project coordinator, and she answered questions about the proposed byway.

Tentatively named, the Amicalola Scenic Byway, the route consists of 81 miles forming a loop, leading from a spur from east East Ellijay to Cartecay and east via Amicalola Falls to Dawsonville and reversing over Burnt Mountain to the Jasper area before returning to Cartecay via Jones Mountain Road. The byway would consist of portions of State Highways 52, 53, 136, and 183, as well as several smaller local roads and spurs.

There are numerous cultural, historical, natural, recreational and scenic points of interest along the route. Amicalola Falls State Park would be the natural anchor for the scenic byway and, because of this, the large majority of the route would be in Dawson County. Pickens County’s contribution would be Highway 136, the Burnt Mountain Road, as well as Jones Mountain Road. There would also be two spurs from the loop, Burnt Mountain Road leading into Jasper and Highway 136 into Talking Rock.

The DOT recently accepted the application from civic groups of the three counties, with the Pickens Chamber of Commerce and Development Authority as two of the sponsors along with the Dawson and Gilmer Chambers of Commerce and the Gilmer Development Authority. In addition to the July 26th public meeting in Pickens County, meetings were also held on July 20th in Ellijay and on July 28th in Dawsonville.

The Scenic Byway designation would “assist in conserving, enhancing, and displaying the history, culture, and attraction of these mountain communities.” The only restrictions on the scenic byway to be imposed by the DOT would be no new billboards, although existing billboards would be grandfathered in.

When asked what is the probability of the Amicalola Scenic Byway becoming a reality, Project Coordinator Cochran said that she was “very optimistic” and that the DOT is looking “favorably” upon the project. The recent public meetings are to seek input from the public and offer the chance for any objections from area residents. So far, Cochran said, there were only a few minimal objections, mostly from residents fearing an increase in traffic along the smaller roads.

“Of course, we don’t want to force anything upon the residents that they don’t want,” Cochran stated. She added that the DOT will consider any objections and will possibly “edit” the route in an effort to make any needed accommodations.

There are currently fifteen scenic byway designations in Georgia. Surprisingly, although the North Georgia Mountains are some of the most scenic areas of the state, there are only three scenic byways north of Atlanta. Those three include: The Russell-Brasstown Scenic Byway northwest of Helen; The Cohutta-Chattahoochee Scenic Byway in Murray and Whitfield Counties, which includes Fort Mountain State Park; and, the Ridge and Valley Scenic Byway that runs roughly from Summerville to Armuchee in northwestern Georgia.