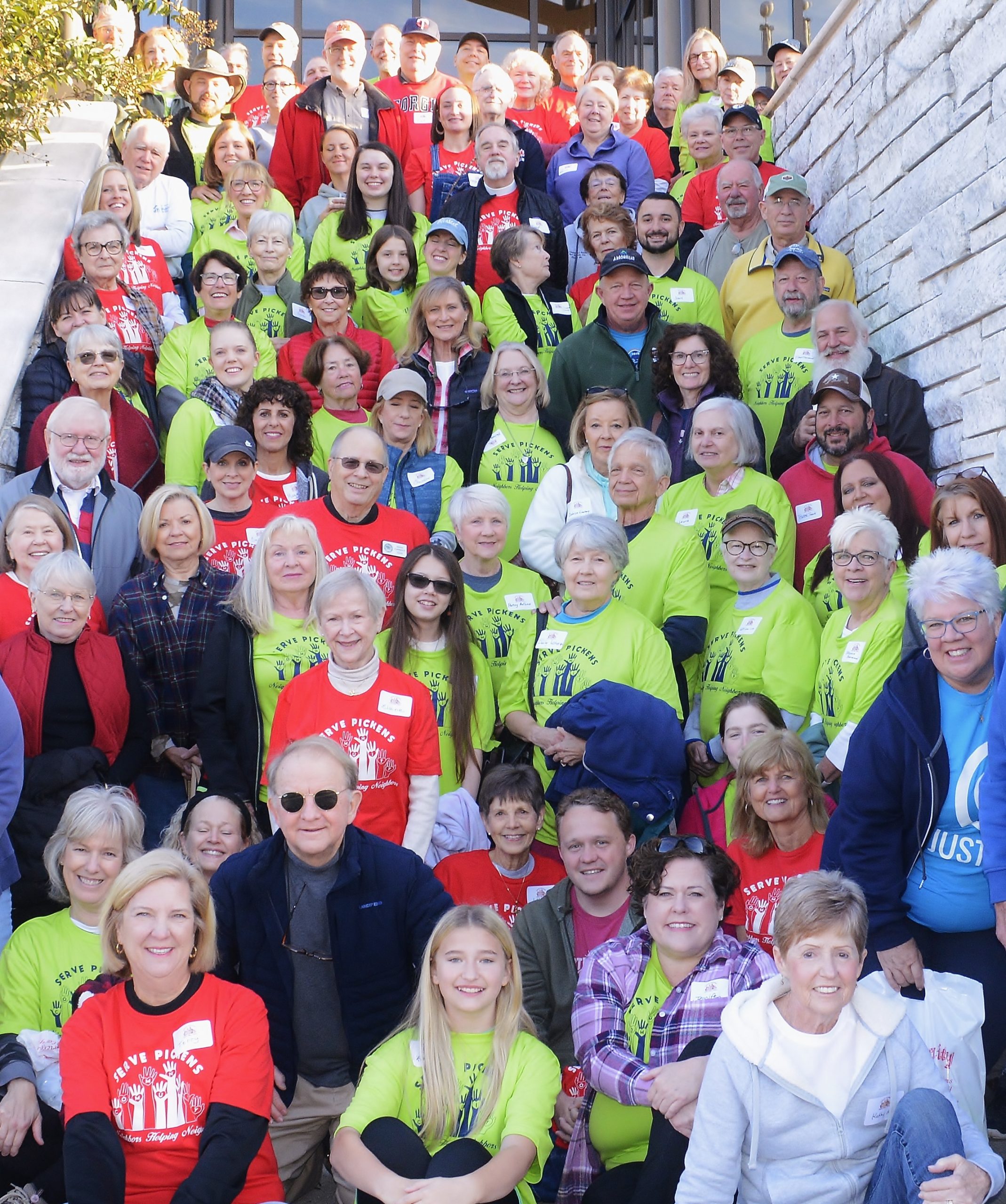 Serve Pickens – Thanks I needed that

By Jim Brescia with photos from Max Caylor

I consider myself to be an optimistic man.  I often remind myself of the many blessings in my life.  I am grateful for the life beyond combat that was granted to me.  But I must confess that sometimes what I see going on in this country gets me down.  Sometimes I cannot put on a raincoat fast enough when politicians urinate into the air and try to tell me that it is raining.  I worry about the attacks on the tenets upon which this country was built.  I have concern over rising inflation.  I wonder why people do not take some action to make things better.

Suddenly, out of the dark fog of my concerns comes Serve Pickens, Saturday!  The concept was to solicit volunteers for a one day blitz of helping local non-profits.  The slogan was “Neighbors Helping Neighbors”.  I was asked to join the Steering Committee early on but I had my doubts.  A new volunteer opportunity in a community already rife with unfilled volunteer opportunities.  I considered asking the committee members to submit to a test for hallucinogenic drugs.  But at the first meeting I attended everyone seemed so well grounded in reality and so focused on the mission that I decided not to ask for testing.   You see, these people had things that are more powerful than drugs.  They had faith, determination and unbounded energy.  They did not shy away from work.

In the meetings that followed they never lost their focus nor did they ever entertain a thought of failure.  To borrow a concept from the movie “Field of Dreams”, the committee believed that if they “built it” the generous and caring people of Pickens County would come.  It was beautiful to watch.  People contributed whatever they had to offer whenever it was needed.  There was no assigning of duties.  I heard lots of “I will do that”; “I know someone who can/has…”; “let me look into that”.

There were regular, brief meetings that were held more frequently as the date approached.  One of the most important ingredients in a project with a lot of parts (and Serve Pickens had many moving parts) is communication.  If you missed a meeting, you would get to see the detailed notes from the meeting.  Feeling sick?  Not to worry, the meeting is available on Zoom.  People “attended” meetings on Zoom while suffering from Covid and bronchitis.

Having said all of the above, I confess that I had a little trouble breathing as the event approached.  When I wake up at 5 a.m. without the use of an alarm, I am worried about something.  But the Committee members remained faithful to the mission and seemed to become more energized and confident as the date approached.  I cannot divulge the ages of the Committee members but suffice it say that we would never be accused of being too young to know better about any topic.  But the group was youthful!

Then the day arrived, Saturday, October 22nd.  There was a kick-off breakfast.  As I struggled to breathe, due to anxiety, the volunteers poured in.  In all, 200 volunteers were distributed to complete projects at 18 non-profit organizations throughout Pickens County!  I gave myself a healthy dose of “Oh ye of little faith”.

I learned an important lesson.  I cannot directly affect what is happening throughout this country (well, not until November 8th), but I can make the part of the country around me a better place to live.  The lesson was shared by 200 other people that day.  Sign me up for next year!