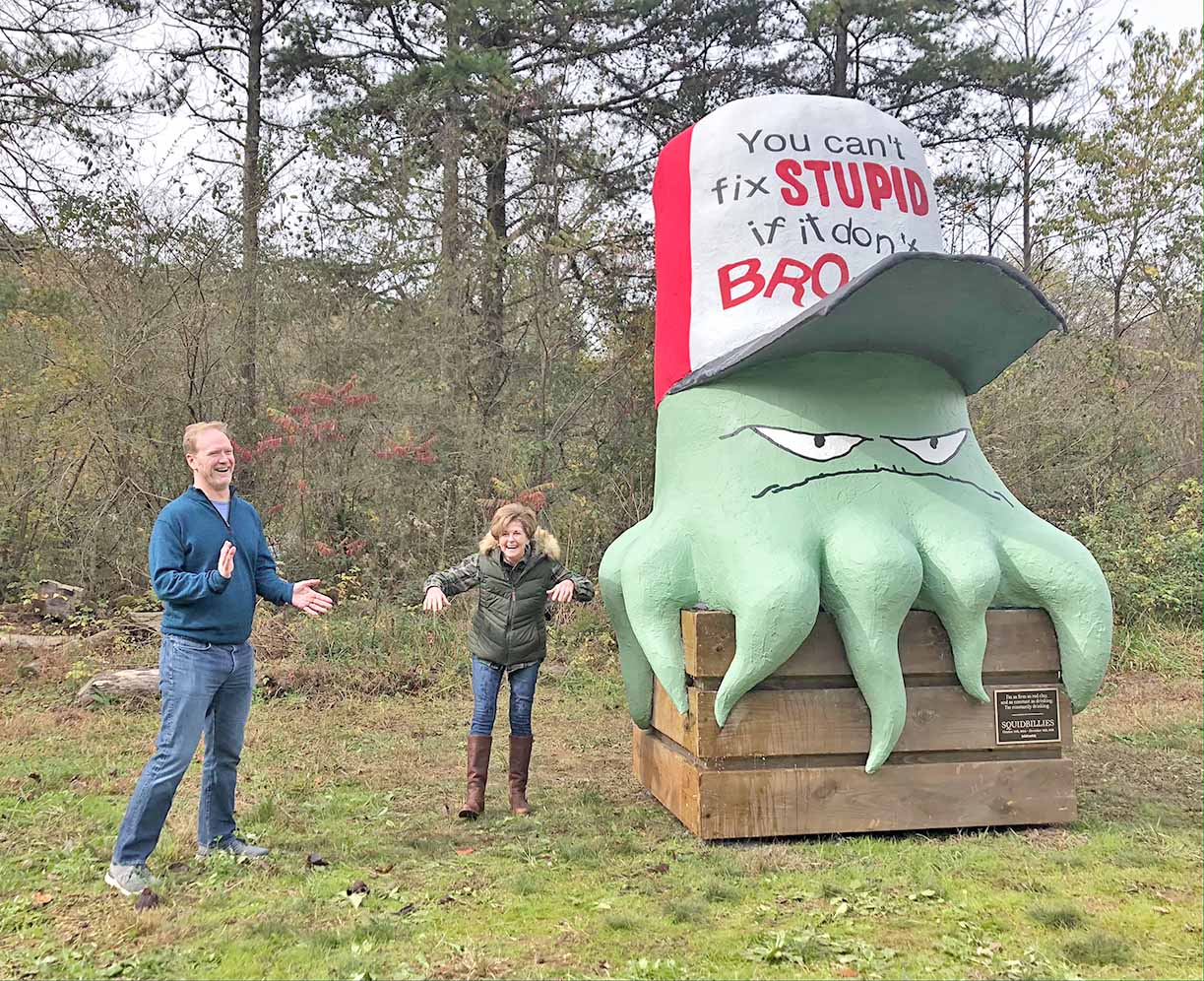 Squidbillies co-creator Dave Willis, left, with his mother who christened the Early Cuyler monument with a bottle of moonshine. The new roadside attraction is located off Highway 52 in Ellijay. A plaque on the bottom righthand corner of the monument has a quote from the first season - “I’m as firm as red clay, and I’m as constant as drinking. I’m constantly drinking.” Underneath the quote the plaque reads, “Squidbillies – October 16, 2005 – December 12th, 2021.”

Squidbillies’ co-creator Dave Willis – who was on site for the unveiling of the 12-foot tall statue of the show’s protagonist Early Cuyler – would beg to differ.

“The show has been around for what, 16 years?,” he said to the modest crowd that gathered at the Cartecay River Experience in Ellijay for the November 5 event. “So, you know…if there can be a statue for a Confederate general there can certainly be a statue for a TV show, right?…[It] will stand here for five years or eternity – whichever comes first.”

Willis said he and several others who work on the show are from Conyers, Ga.,  but the show is based on rural life in the north Georgia region. He regularly traveled up through Ellijay to Blue Ridge with his family and friends.

“It’s very much a homegrown thing,” Willis told the Progress. “My parents have a cabin in Blue Ridge so we’d come up here and pass through a lot – and we’ll drop Ellijay’s name here and there in the show.”

The unveiling marks the beginning of the 13th and final season of the series, which is one of the longest-running animated series’ on the Adult Swim network. Squidbillies premiered in 2005.

This season the main character, Early, will be voiced by well-known comic Tracy Morgan. The big change came after Unknown Henson, who has been the voice of Early since the program first aired, was fired for derogatory remarks on social media about Dolly Parton and the Black Lives Matter movement.

In addition to bringing Morgan on board, other heavy-hitters will be involved in the final season. The legendary Willie Nelson, as well as Amanda Shires, Los Lobos, Buddy Guy, Dinosaur Jr., and Sturgill Simpson will cover the now iconic opening theme song.

“We’re not going to win an Emmy with a name like Squidbillies,” Willis said laughing, “but we’ve got Tracy Morgan and Willie Nelson, so I guess we’ve made it on some level.”

Squidbillies is a quarter-hour animated comedy series written and produced by Dave Willis (Aqua Teen Hunger Force), Jim Fortier (Space Ghost Coast to Coast), and Alan Steadman. The first episode aired on Sunday, Nov. 7 at midnight. There are 10 episodes in the final season.