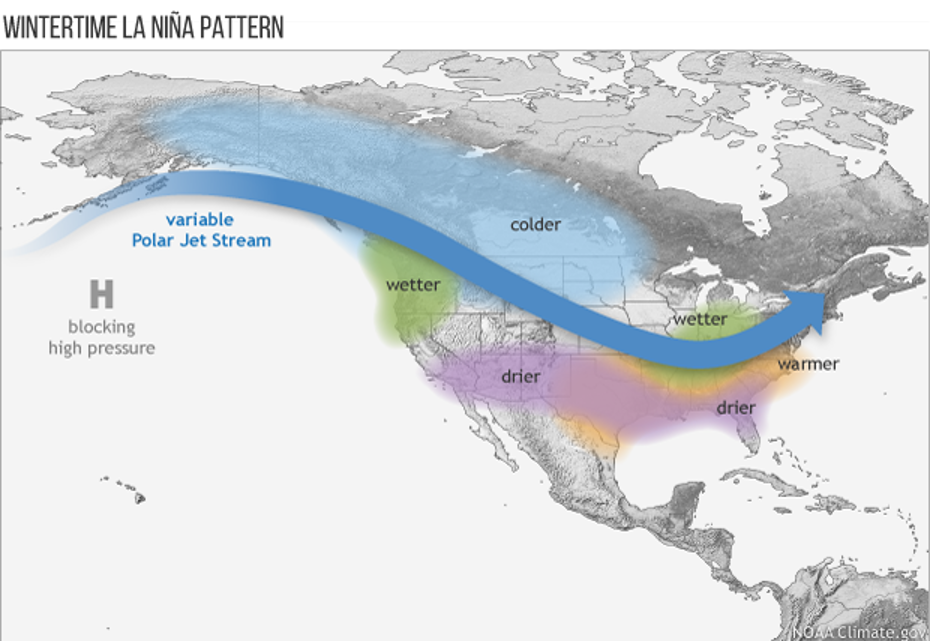 By Pam Knox for CAES News

December is the start of the three-month winter season here in the Northern Hemisphere. In 2021, December started out 4 to 6 degrees Fahrenheit (F) warmer than normal. Whether this is likely to last through the rest of the winter depends on two major weather patterns that are affecting the winter climate in Georgia.

The first pattern is the long-term trend in December-through-February temperatures that we are experiencing due to greenhouse warming across the planet.

The second is the variability of climate across the region due to the El Niño – Southern Oscillation (ENSO) that swings back and forth between El Niño and La Niña. During El Niño, or little boy, trade winds weaken; during La Niña, or little girl, trade winds strengthen.

Since the 1960s, December-through-February temperatures have increased in Georgia by about 5 degrees F, according to records kept by the National Oceanic and Atmospheric Administration’s (NOAA) National Centers for Environmental Information. There is a lot of year-to-year variation, but the general trend is clear and is consistent with warming we see in other parts of the world. This upward trend in temperature will continue to affect winter weather in Georgia in the future.

ENSO affects the climate in the Southeast by shifting the path that winter storms follow to the north or south. When the path moves closer to Georgia in El Niño years, we see more clouds and precipitation and lower temperatures over the state as a whole, although the effects are usually most pronounced in southern Georgia.

When the path shifts farther to the north, Georgia sees more sunny days, less precipitation and warmer conditions, since we are blocked from getting the really cold air from the north and have more warm, sunny days.

We are currently in a La Niña that is expected to last into spring and, as expected, the major storm path is well to our north, putting us in warm and relatively dry conditions so far. Of course individual storms can and do move through Georgia in the winter, and we can get rain — and even snow and ice — in La Niña winters, but statistically we are likely to see warmer and drier conditions overall in about eight out of 10 years.

From a statistical perspective, the outlook for winter 2021-22 in Georgia is likely to be warmer and drier than average, especially in south Georgia. However, there could be unforeseen events that buck the statistical prediction and give us conditions that don’t follow the expectations.

If we get warm and dry conditions this winter, it will have some impacts on agriculture in 2022.

A warm winter could mean fewer chill hours for fruit, which could reduce the yield of blueberries and peaches. If we get enough cold weather, that should not be a factor, but the plants could bloom earlier than usual, making them more vulnerable to a late frost.

Warm and dry conditions also reduce the recharge of soil moisture that usually occurs over the winter. This makes crops in the next growing season more vulnerable to dry spells, and drought conditions are more likely to occur in the summer after a La Niña, especially if we swing rapidly to the opposite phase, El Niño.

For more insights on weather and climate in the Southeast U.S., visit site.extension.uga.edu/climate.

Pam Knox serves as a University of Georgia agricultural climatologist with the Department of Crop and Soil Sciences.

The average location of the jet stream and typical temperature and precipitation impacts during La Niña winter over North America. Map by Fiona Martin for NOAA via climate.gov.