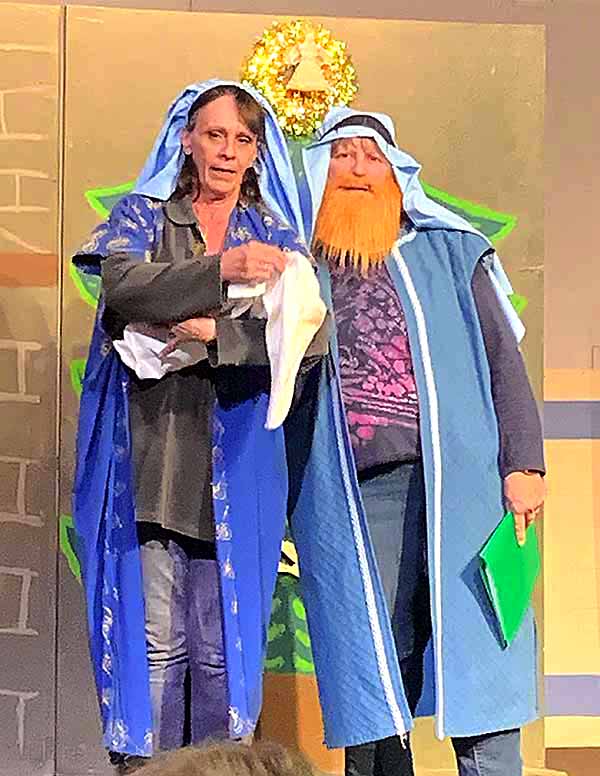 Photo by Eve Sauer.  Away in a Manger are Mary (April Miller) and Joseph, played by a very familiar-looking but heavily disguised actor.

This Friday night The Charitable Sisterhood Christmas Spectacular, by Bo Wilson, begins three weekends of  comedy at Tater Patch Players. The director, Jan Simpson, calls the show a “Christmas comedy whodunnit.” It will open November 26 for nine performances. Tickets will be available at www.taterpatchplayers.org or at the box office one hour before showtime. The Sunday shows will be at 2 p.m. and the others at 7:30 p.m. The theater is a 95 Philadelphia Lane, in Jasper.

Tater Patch is again hosting “share night” on Tuesday, November 23 at 7:30 p.m. This special night is for members of our community who might not be able to afford tickets. The troupe opens the doors to their  final dress rehearsal for them and asks that Share Night attendees bring a donation of bags of nonperishable food or toiletry items for the CARES Food Pantry.

This play is unique because the backstage crew,  Amelia Zerkle and Jessie Ray, appear often on stage, especially in the second act. The story switches back and forth between the Sisterhood’s church basement and the stage of the Christmas Spectacular. The two stage crew are a big part of this transformation and add to the fun. The all-volunteer scenery crew of Tater Patch Players has outdone themselves with this show. Besides the ever changing location scenery, they have created a huge number of unique props and costumes. The crew has worked hard to create props that, while made by Tater Patch’s very skilled volunteers, look like they were made by four very amateur “church ladies” who are on a very low budget and who have run out of time. They have created everything from a one-of-a-kind Baby Jesus to a Christmas sweater slide show, to a very one-of-a-kind Bethlehem. The group volunteers to work every week on these sets, and the theater is filled with energy and conversation while they are there. They invite you to join them by emailing the troupe and volunteering to join their busy crew. Everyone is welcome and has a talent that the troupe needs.

Ms. Simpson is assisted in directing by Phyllis Zerkle, who has appeared previously in several comic roles on the Tater Patch stage. Both of them have worked hard with this cast and in developing the very interesting staging and are rightfully proud of the results. The play is a merry-go-round of laughter, but is ultimately about how we can lose the meaning of the Christmas season in all the preparations. The actors are sure to leave the audience brimming with smiles.

For further information or questions, please contact the theater, located at 96 Philadelphia Lane, by phone (706-253-2800) or email (taterpatchplayers@gmail.com).