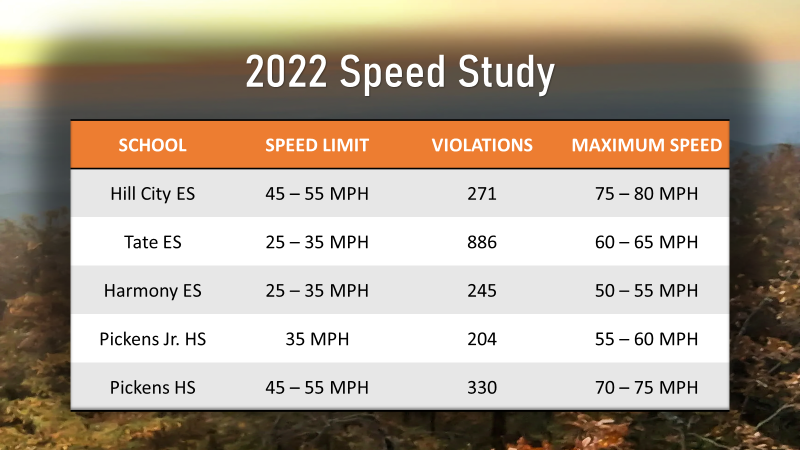 Previous RedSpeed studies found speeding in school zones was even worse than sheriff officials thought it would be.

One camera system, Flock, is already in use on Pickens roads and the second, RedSpeed, will be activated in January at school zones where high speed traffic is a concern.

Both systems will eventually be tied into a comprehensive technology package with the 911 dispatch office, body cameras on officers and dash cams – offering new live stream capability. It already offers command officers the ability to log into an officer’s live stream off the body cam and see and exactly what an officer is seeing.

“When I first started in law enforcement, people at crime scenes would say aren’t you going to take prints or something and I would say, ‘this isn’t CSI,’” Craig said. “And it’s still not but it’s a lot closer.”

Sheriff Craig said when they did studies of speeding in school zones in 2019 and earlier this year he expected to find speeding in front of Tate and Hill City campuses as both are on Highway 53 with passing lanes.

Not only did they find that but also that people were flying in front of Harmony Elementary and Pickens Junior High, both on quieter roads. “We had people running 55 in the 25 at Harmony and 60 at the junior high and that’s with a four-way stop right there. I was surprised they were going that fast.”

The tests showed that in 2019 1,545 motorists drove in front of schools on the test day above the posted speed limit. In 2022 the number of speeders on the single day rose to 1,936.

To curb this, the sheriff’s office and schools will begin using a RedSpeed program where anyone going through the school zones at Tate, Hill City and Harmony elementary schools, the junior high and high school will have their speeds monitored during a time period starting one hour before school, running through the time students are on campus and extending one hour after school.

Speeders will be videoed by the system with speed recorded and identified by their license plates.

From there it will go to deputies who will check and confirm it before a ticket is sent by the mail from the RedSpeed provider in Atlanta. Craig wants it made plain that this will all be checked by real, local law enforcement officers. “No one is going to get a ticket from a computer,” he said.

The ticket can be fought in court, just like any other ticket. The fine will be $75 for a first offense and $125 for any later offenses. These are considered “civil” tickets and won’t result in points on a license or hikes in insurance. Under state statue, proceeds from  tickets by automated systems must go directly back into local law enforcement budgets, which will fund the Flock cameras among other things.            While Craig and Hall said it would seem slowing people down in school zones would be a solid goal, they noted there are several criticisms of the program they wanted to address:

• It is not a speed trap. Only drivers going 11 miles per hour or more over the posted limit will be ticketed. The use of the system at the school zone will be well marked and there will be a period of warnings before it goes fully live.

• There are proven results from other counties. Craig said reports showed that is has been very affective in Roswell and Alpharetta, lowering speeds in school zones by 50 percent in Roswell after a year. The Progress previously reported that Fairmount has begun using a similar system and saw a sharp decrease in speeding in front of the school there on Highway 53.

• The tickets will come by mail from an Atlanta address. The sheriff’s office will show examples of the tickets to make it clear what they will look like before the system goes live so there won’t be confusion with scams.

• People will have an opportunity to see the video of their vehicle and speed online when the ticket arrives. If they question it, they can go to the local courts. Look for information on how to pay or challenge on the tickets.

• Thirty-five percent of the revenue generated will go to RedSpeed, but they will maintain the entire system and handle all ticket mailings. Craig said he has a very specific contract with them and could cancel at any time if the original stipulations – at least 11 miles an hour over, only in school zones and during school times, video evidence of all offenses – are not followed.

Pickens County has joined more than 1,500 areas in the U.S. that are using Flock cameras to record passing license plate and vehicle information.

From October 30 through November 28, the 11 cameras spread around main travel corridors entering the county scanned 715,427 license plates. All the plates are then checked against a list of categories such as owners that have outstanding warrant, known sex offenders, expired tags and other offenses. During the preview, Craig showed how his phone had alerted him that someone had just entered Pickens County driving a car with a stolen license tag. The system sends the alert to officers who will know the description and where the car was when the plate was scanned. It takes about 12 seconds after a vehicle passes for the system to check on any outstanding violations.

Officers can also search for vehicles, either by referencing vehicles registered to a person or  searching descriptions of “gray car [of a certain model] with bumper stickers or white truck with ladder racks.” Craig noted this system has led to two very quick high profile arrests, one was a shooting where the Pickens investigators used Flock cameras in neighboring counties to locate the suspect (as they knew his vehicle tag number) in less than an hour. Another case was a robbery where once they had a vehicle description they could trace the suspect’s path and determine their whereabouts.

A third case was a person with dementia who had drove off in someone’s car and was located in less than 20 minutes.

The system is designed to only scan the vehicle, not a driver or occupant/driver’s face.

Craig described their intended use as similar to a security system for the county. They don’t want to list where all the cameras are, but he said they will know if someone shows up from another area with an outstanding warrant or in a stolen car.

“I think people will find that if they want to bring trouble, this isn’t the place,” he said. “If we get a report on someone violent fleeing a metro county, we’ll know if they come here in their vehicle.”

Chief Deputy Jeff Hall described it as a “one more tool for our toolkit to help solve crimes.”

He said this will also help tremendously in chases. Hall envisions further uses to “stretch manpower” when the cameras can be linked with other technology and tied back to the 911 dispatch and the sheriff’s administrative office.

Hall said the use of GPS technology is making the old zone system of patrols obsolete, as now dispatch can look at real time location information of officers in assigning calls.

With the Flock system, Pickens can tie into all counties that also have it, giving them a lot of coverage to find vehicles.

Responding to potential critics, Craig said he knows people who have a fear of “Big Brother is watching but in reality you give up more privacy on your cell phone everyday than we can ever do with these cameras.”

Hall said the public is accustomed to seeing grainy photos of suspects from security cameras. He said this is similar except it’s easier to figure out an identity with a car tag than a photo no one recognizes.

“Some folks may not be happy with this, but it is a tremendous tool to solve crime,” he said.