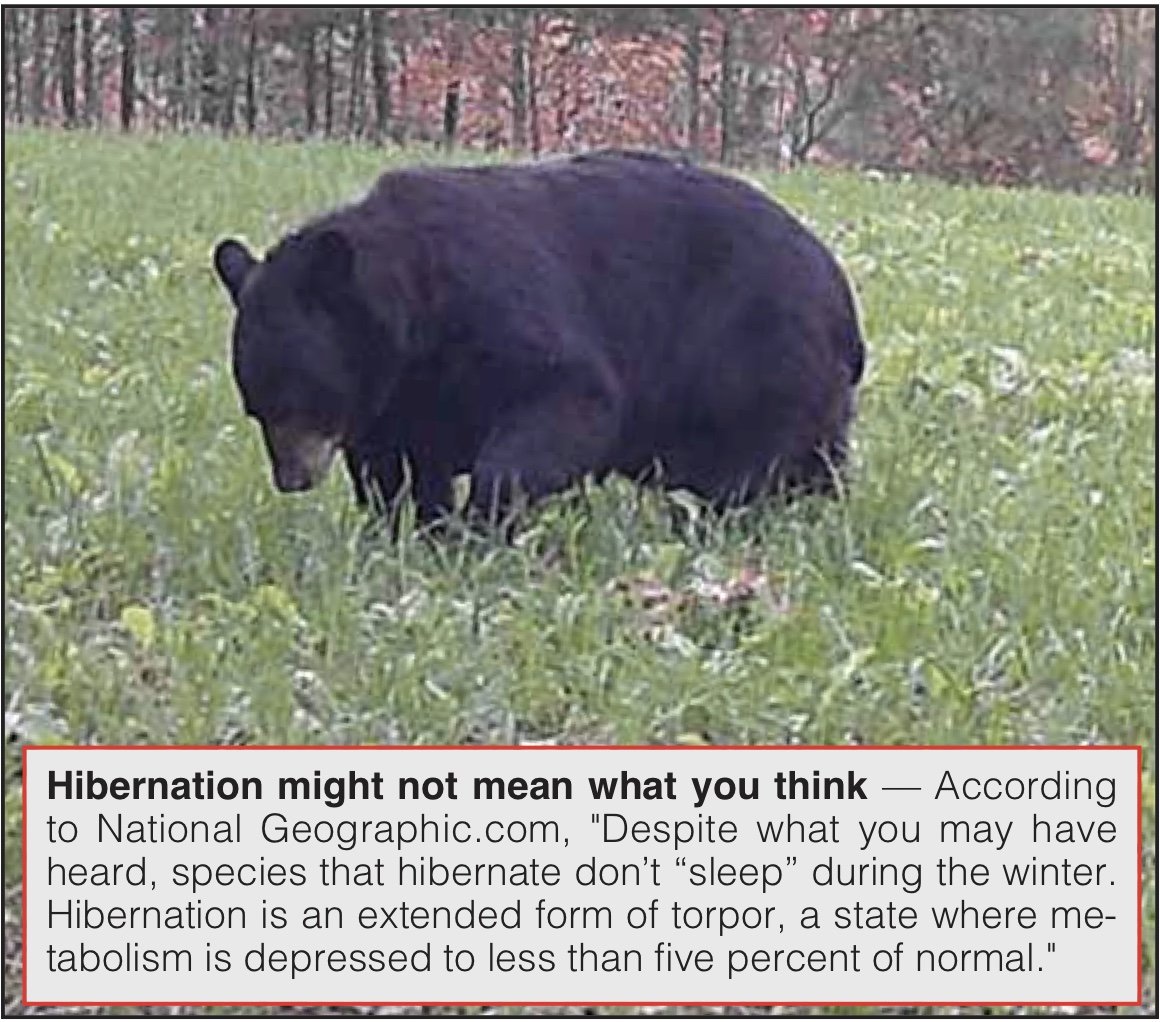 A trail cam photo from the Grandview area shows a bear fattened-up for winter in mid-November. The bear showed up regularly through early November but hasn’t shown up recently.

Winters in north Georgia are relatively mild, which leads some people to believe our black bear population doesn’t hibernate. But an ongoing study by the Georgia Department of Natural Resources Wildlife Division provides hard evidence that they do – its just that hibernation patterns can vary from bear to bear depending on food source and other factors.

“When people ask if bears hibernate, what people mean when they say ‘hibernate’ is different a lot of the times,” said Adam Hammond, Georgia DNR senior wildlife biologist and Bear Project leader who described the “advanced, well-designed” process of a bear’s biology that allows them to go months without leaving their den. “But, yes, absolutely we are finding that a high percentage of our bears spend time in the winter in dens.”

For the past 15 years or so GDNR’s Wildlife Division has sporadically collared and tracked black bears, Hammond said, but in 2019 they launched a more significant effort to monitor the bear population – which includes monitoring their den usage. What they’ve found is that around 90 percent of collared females – due to their reproductive cycle and needing a place to give birth and care for cubs – will spend significant periods of time in dens. Hammond said only younger females were found not to den. This overwhelming 90-percent figure is compared to approximately 40 percent of the collared male bears they found spend time in dens, with denning patterns highly dependent on food availability, health of the bear, and temperature (which impacts food supply and metabolism).

The way a black bear hibernates is different than the way a rodent or bat – whichmany consider to be “true hibernators” – do.

According to BearWise.org – a multi-state bear education effort created by bear biologists from all over the southeastern U.S. – squirrels, bats, rodents, marmots, and other “true hibernators” enter a state “close to suspended animation where body temperatures fall close to freezing and metabolisms slow almost to a halt.” A bear’s metabolism, heartbeat, and respiration rate does drop dramatically, “but its body temperature only drops about 12 degrees during hibernation. They don’t eat at all, nor do they go to the bathroom; bears’ dens are remarkably clean and odor-free … unlike true hibernators who wake up every few days to drink, go to the bathroom and nibble some stored food before going back to sleep.”

During their hibernation period, bears burn thousands of calories a day and heal themselves in the process. They also don’t lose bone or muscle mass during this time – just fat. Despite the fact that they can hibernate for longer periods of time than “true hibernators,” bears can wake easily while in this state.

Why the need to hibernate?

Why bears hibernate is predominately an issue of food supply, not an issue of the bear being cold (although temperature does have some impact on metabolism during this time). And, again, in the case of females, there is the need for a place to give birth to and raise cubs.

When winter arrives and food is in shorter supply black bears den up and live off their fat reserves. Here in north Georgia, Hammond says bears will enter their dens anywhere between mid-November to as late as January, then emerge sometime around April or May of the following year.

“But there is a lot of variability in that,” Hammond said of how long bears will stay in their den at a time, and when they initially enter and emerge. “Some of the collared bears did lock down for the whole winter, then some would have movement slowed in the winter and they would stay in a den a few weeks, then move to another area and stay there a while, then come back. A lot of it is tied to food and health and temperature.”

Up north where winters are colder and longer and food is in shorter supply during those winter months, black bears will den longer than in more temperate climates like north Georgia. Bears farther south may den less time than they do in this region.

“Bears may den for much shorter periods of time and sleep less deeply if food (natural or human-provided) is available all year,” BearWise reports. “In sub-tropical Florida only pregnant females den up for the short winter; other bears may turn in for just a week or two or not at all.”

Black bears spend fall fattening themselves up for the winter, with their favorite menu item in these parts being the high-starch, high-fat oak acorns, which Hammond said is their main food source. BearWise notes that in the fall black bears will spend 20 hours a day eating, and put on 100 pounds in a few short weeks. The process is called hyperphagia.

“During spring and summer, bears eat around 5,000 calories a day, but in the fall, they are trying to eat up to 20,000 calories every day. In the Southeast when acorns are plentiful on trees, bears gorge on the energy-packed nuts…. A pound of acorns has about 2,100 calories; a pound of blueberries, just 256 calories.”

If bears have access to human food their bodies will not be triggered to go into hibernation mode. Conversely, if acorns weren’t abundant enough in fall for bears to appropriately fatten up, they might be forced out of their dens to forage for more food.

When it comes to females, Hammond discussed a unique part of their biology called “delayed implantation” and its relationship to their denning patterns.

“Summer is breeding season, but the fertilized eggs won’t implant until they enter the den in November or later,” he said. “Then it’s around 60-63 days gestation and they give birth in their den.”

The females emerge in the spring and cubs will stay with momma bear that year, and may return with them to the den the following winter.

The bare necessities of a black bear den

The ideal spot for a bear den is somewhere dry, isolated, and safe. As long as those conditions are met, a black bear could choose to set up shop almost anywhere for the winter.

“A lot of the places we find dens are thick with vegetation or on steep slopes – not somewhere you’re likely to just stumble across,” Hammond said. “I mean you could, but they are usually pretty secluded. They need somewhere good and dry, secure from predators, and somewhere females can raise their cubs.”

The biologist said dens range from holes bears have dug in the ground or in slopes; under rock outcroppings; in a hollowed tree or under a root ball in a fallen tree; in rock cavities – and even in a cozy spot under your house.

So…do bears hibernate in our more temperate climate in the southern U.S., you ask? They certainly do.

“The next time someone says black bears do not ‘hibernate,’ please tell them that whatever you wish to call the process, bears do enter a long period of physical inactivity and exhibit some amazing physiological responses to low food availability and temperatures,” writes Mark D. Jones, agricultural liaison biologist and former black bear biologist for North Carolina Wildlife Resources Commission. “In many ways, their ability to hibernate for long periods without feeding or eliminating waste is more advanced and remarkable than what has been considered ‘normal’ hibernation involving periodic arousal to move about and feed.”